Vancouver, B.C. - TheNewswire - November 23rd, 2021 — Ares Strategic Mining Inc. (the “Company”) (CSE:ARS) (CNSX:ARS.CN) (OTC:ARSMF) (FRA:N8I1), is pleased to announce that following detailed geological mapping work across the entire project area, claimed and additional unclaimed lands on Spor Mountain, the Company has proceeded to more than double its land holdings in the area at Spor Mountain. The Ares geological team has also successfully identified over 160 new drill targets within the new property outline which the Company plans to continue developing as the Utah operation commences.

The Company had previously claimed areas of visible fluorspar showings.   An extensive field program including, geological mapping, geophysical interpretation and sampling resulted in a significant increase in potential targets warranting a further 3,899 acres of land being acquired.  The Company now controls almost 6,000 acres across the Spor Mountain District. 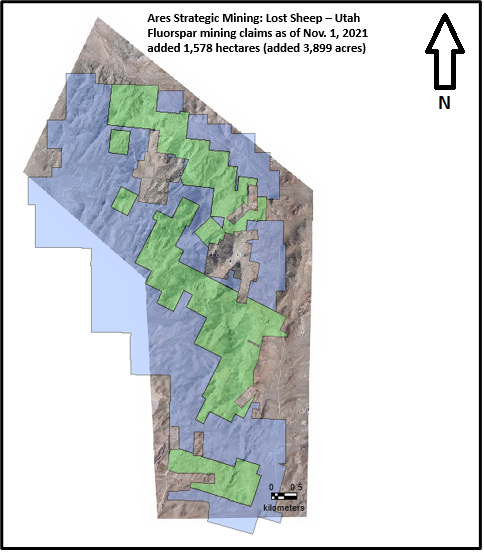 James Walker, President and CEO of the Company said, “While doing the recent NI 43-101 report our geology team invested a lot of time understanding the local geology to identify numerous targets and laying the groundwork for several years’ worth of exploration activities to further develop the mining district beyond the areas currently planned for mining. The team did a tremendous job identifying fluorspar breccias and geological features indicating fluorspar mineralization. We now have over 160 drill targets that further reinforces the long-term prospects for the district, which we intend to begin developing once production is underway.”

The Company also announces a non-brokered private placement of up to 2,400,000 common shares (each, a “Share”) in the capital of the Company at a price of $0.38 per Share for gross aggregate proceeds of up to $912,000 (the “Offering”). The proceeds from the Offering are expected to be used for general working capital purposes. Finder’s fees may be payable in connection with the Offering in accordance with the policies of the Canadian Securities Exchange (the “Exchange”). At this time, the Company does not anticipate any related parties of the Company will participate in the Offering.

All securities issued in connection with the Offering will be subject to a statutory hold period expiring four months and one day after closing of the Offering. Completion of the Offering is subject to a number of conditions, including, without limitation, receipt of all regulatory approvals, including approval of the Exchange. None of the securities to be issued in connection with the Offering will be or have been registered under the United States Securities Act of 1933, as amended (the “1933 Act”), and none may be offered or sold in the United States absent registration or an applicable exemption from the registration requirements of the 1933 Act. This press release is being issued pursuant to Rule 135c of the 1933 Act and shall not constitute an offer to sell or a solicitation of an offer to buy, nor shall there be any sale of the securities, in any state where such offer, solicitation or sale would be unlawful.

For further information, please contact Mark Bolin by phone at 604-345-1576 or by email at jwalker@aresmining.com

Companies typically rely on comprehensive feasibility reports on mineral reserve estimates to reduce the risks and uncertainties associated with a production decision. Historically, situations where the issuer decides to put a mineral project into production without first establishing mineral reserves supported by a technical report and completing a feasibility study have a higher risk of economic or technical failure, though some industrial mineral ventures are relatively simple operations with low levels of investment and risk, where the operating entity has determined that a formal prefeasibility or feasibility study in conformance with NI 43-101 and 43-101 CP is not required for a production decision. Based on historical engineering work, geological reports, historical production data and current engineering work completed or in the process by Ares, the Company intends to move forward with the development of its Utah asset.