Montréal - TheNewswire - June 24, 2021 - St-Georges Eco-Mining Corp. (CNSX:SX.CN) (OTC:SXOOF) (FSE:85G1) is pleased to disclose that last week it received a preliminary report from Globerpro, the group tasked with coordinating its ongoing feasibility study for the EVSX proposed battery recycling operation in the city of Baie-Comeau on the Québec North-Shore.

This press release outlines and summarizes some of the key findings of the study. Some elements have been kept confidential to protect intellectual property and industrial secrets.

The preliminary report covers many topics in detail, allowing the Company to accelerate permitting and grant requests as well as alternative financing. The in-depth research involved data obtained from governments, industry operators, and car manufacturers.

Recent Model Development Evolving in Parallel with the Feasibility Study

The findings helped the Company negotiate with industrial equipment vendors and allowed management to direct its engineering design and equipment acquisition.  The preliminary report also convinced management to design the plant as a scalable operation with the aim to deliver the lowest possible CAPEX costs.  The building and land identified should allow the Company to save months, if not years, of sourcing material, eliminating construction timelines, and drastically reducing building reconfiguration and adaptation.

The Company is negotiating the acquisition of all the industrial equipment required for the first circuit. It expects reception of these units during the third quarter of this year.  The equipment to be delivered is expected to allow the processing of up to 79,200 tons of gross batteries or approximately 20,000 tons of feedstock available for the chemical tech plant portion of the EVSX operations in Baie-Comeau. By way of comparison, Li-Cycle’s declared capacity in Ontario, Canada, is currently 5,000 tons per year with additional capacities of 15,000 tons presently being planned and built in the United States and a planned plant with a 20,000 tons per year capacity with Redwood Materials also in the United States.

Key Elements of the Preliminary Report

Construction costs, equipment acquisitions, and financing are being kept confidential for now. However, the Company’s management is comfortable to disclose that no large equity financing is being planned to finance the operations and that cash on hands, grants, and debts, as well as equipment vendor lease-to-buy programs, should finance the totality of the proposed operations.  The Company will release cash flow projections with excerpts from the final feasibility report expected later this summer.

Access to Used Batteries and Feedstock Material to be Processed

The main challenge identified by the preliminary report lies in accessing EV batteries to be recycled.  The current availability is severely limited.  Projections based on different data sources and systematically directed interviews with car manufacturers show that the Electric Vehicle battery recycling market is currently microscopic in size and won’t take flight for another decade. 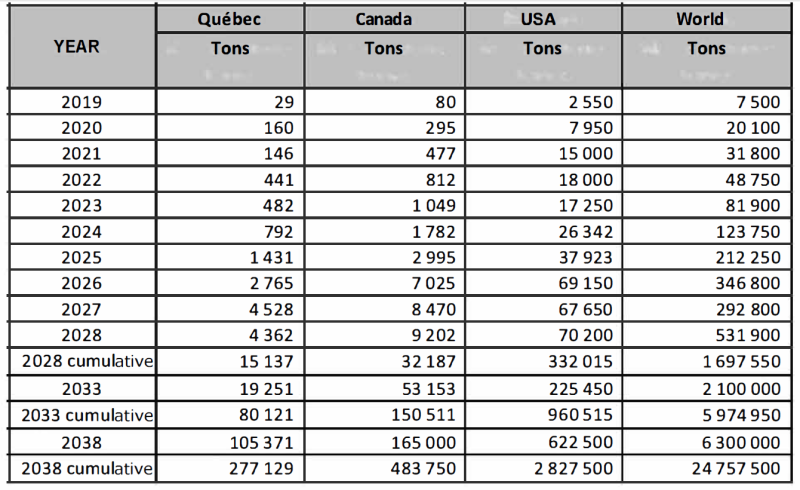 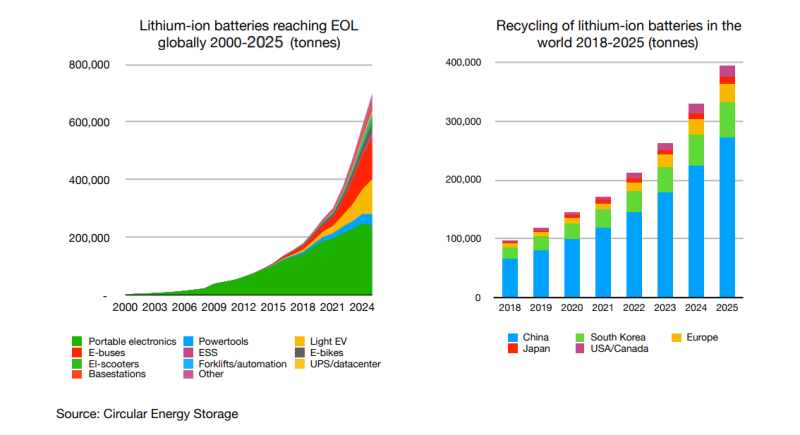 The Company’s phase 1 project design incorporates four processing circuits: three full-length circuits from dismantling to purification and one circuit that only targets feedstock and concentrates.  Over time this will allow for easier shut down for maintenance or simply for reconfiguration for other types of batteries.

The lack of sizeable availability of EV batteries will be exacerbated by a surge of recycling capacity coming online in the short term.  It was noted that EVSX would need to establish partnerships with governments and industry aggregators if it wants to have access to a steady minimum supply.  The preliminary report covers in detail the partnerships and relationships currently being established. This portion of the report will be kept confidential for the time being. 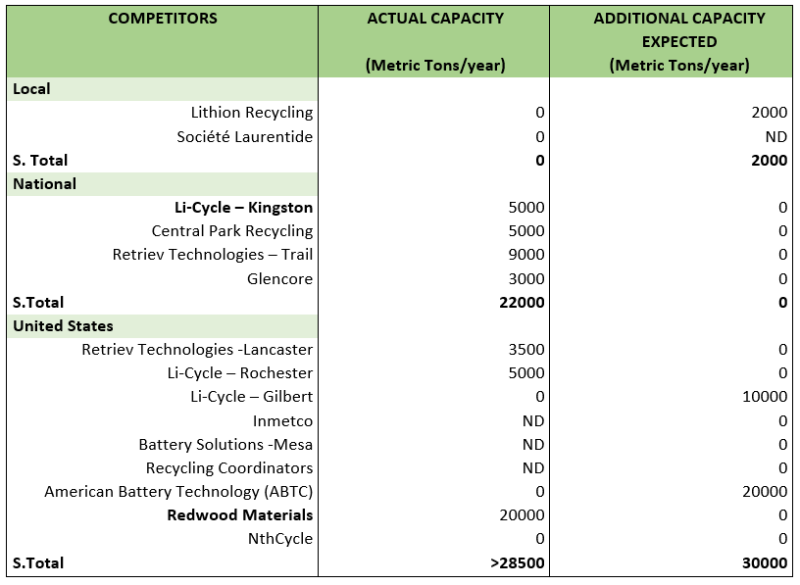 A preliminary environmental evaluation is detailed in this report. The initial conclusions of the consultants point to the requirement of an environmental ministerial authorization and exclude the project from the environmental impact evaluation and examination process (REEIE).  This allows the Company to stay within its projected timeline.  In addition, the segregation of the tech plant circuit allows for scalability and ease of maintenance and limits the size of the acid tanks to less than 10,000 m³ allowing for simpler environmental permitting process. The consultants otherwise note that phase 2 of the project would bring it within the constraints of the full environmental review process.

A good portion of the report covers the Company’s industrial and chemical processes.  Some challenges are mentioned, like the conversion of some of the process outputs and the disposition of the plastics and other PVCs. Both aspects are being covered in a partnership with third parties who will remain confidential at this point.

One challenge mentioned by the report has a solution that is not being covered by the preliminary report: The Company has designed a solution to discharge the batteries’ residual electric charge in bulk and is working on the recuperation of this electricity to be sold to the private electric grid of the local municipality in the context of the current project.  This aspect of the process will generate new patent filings and, therefore, will not be disclosed at this time.

Although the validation of the chemical technical process itself is handled by WSP in a “black box” and will not be disclosed until the final feasibility report, the current report covers all aspects surrounding it.

List of Material Expected to be Recycled in this Process

Traditional battery recycling focuses on removing expensive metals, leaving the balance of the materials to be sold, exported, or incinerated in a waste-to-energy program. This is further complicated by the fact that each battery has its own structure and composition, and manufacturers are not required to disclose battery contents. The EVSX battery recycling plant will recover typical battery materials as well as metal processing by-products. 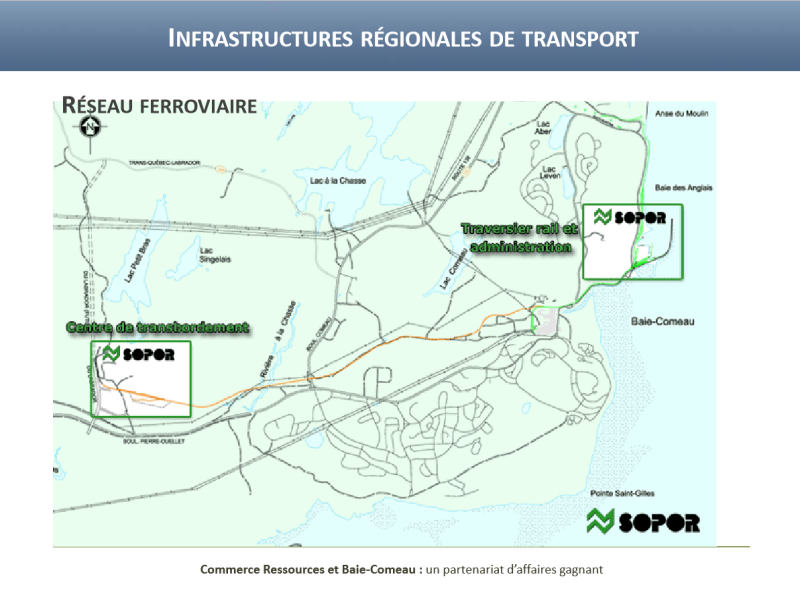 The report outlines the advantages of choosing the Baie-Comeau area for the project’s first industrial plant beyond the infrastructure and geographical location. In addition, the proximity of the Alcoa aluminum plant is of additional positive merit identified.  The research highlights that the level of support the project is receiving from the City of Baie-Comeau and local governments, for what is overall a small $30 million phase 1 project, would not necessarily be received similarly in other markets. Baie-Comeau is orienting its future development around battery metals, green energy, and the transport industry. The region sees the EVSX project as a steppingstone capable of attracting complementary projects over time.

Conclusion of the Report, Excerpt translated from French

The battery recycling plant project presented by EVSX finds its strength in its:

Through its location, the project also leverages other assets:

EVSX's business plan for the coming months is to confirm these strengths, for example, by securing various letters of intent, and to refine the elements of the project under review as of the publication date of this report. Among these elements, we may quote:

The first phase of this feasibility study highlighted the challenges to be tackled in the coming weeks, as well as the opportunities for competitive differentiation. It did not identify any barriers that would prevent the continuation of the pilot-plant project business opportunity analysis.

Founded in 1998 in Montreal, Globerpro International supports businesses in their transformation and development projects. Globerpro’s mission is to support companies by addressing the strategic issues and challenges they face and to help them stand out through innovation and the quality of their management. Over the years, the team has earned an enviable reputation for its approach, its knowledge of the markets, the validity of its actionable recommendations, and its ability to carry projects to concrete outcomes that benefit clients.

St-Georges is developing new technologies to solve some of the most common environmental problems in the mining industry. The Company controls all the active mineral tenures in Iceland. It also explores for nickel & PGEs on the Julie Nickel Project and the Manicougan Palladium Project on the Québec’s North Shore. Headquartered in Montreal, St-Georges’ stock is listed on the CSE under the symbol SX, on the US OTC under the Symbol SXOOF and on the Frankfurt Stock Exchange under the symbol 85G1.