Reykjavík – TheNewswire - October 26, 2020 – St-Georges Eco-Mining Corp. (CSE:SX) (CNSX:SX.CN) (OTC:SXOOF) (FSE:85G1) is pleased to report that it has completed the acquisition of Melmi EHF, the Icelandic corporation that owned the majority interest in the Thor Gold Project and the remainder or the Icelandic mineral licenses not already controlled by St-Georges.

This transformative acquisition gives total control over the mineral licenses of the Republic of Iceland to St-Georges, making it the only junior exploration company to own all the mineral rights of a western country. This acquisition allows St-Georges to control its destiny and plan its exploration campaigns with no interference. It also gives the Company’s geological team access to extensive libraries of geological data, a large number of historical mineral samples and a well-maintained and secured national core shack that will be useable for future development. Furthermore, all the diamond drill cores from the Thor Gold project are now in the Company’s ownership and possession. The Company expects to be able to resample these cores in the process of elaborating its maiden NI 43-101 Gold-Silver and Copper resource estimate on the Thor Gold Project.

As previously disclosed in a press release on July 2, the Corporation will pay up to CA$775,000 in consideration of all the Melmi EHF shares as follows:

In September, the Corporation drilled a reversed circulation (RC) drill hole for a total length of 124 meters.

In October, reconnaissance and follow-up fieldwork was conducted in Vopnafjordur (Vopna) and Tröllaskagi (Trolla) projects.   Mineralization bearing outcrops were identified and sampled and brought to St-Georges’ secure facilities in Reykjavik for petrographic analysis. Some of these samples were prepared to be sent for assays to ALS Laboratories in Dublin, Ireland. Management expects that the results of these essays will become available later this year, and the Company expects to report on it as soon as the information becomes available. 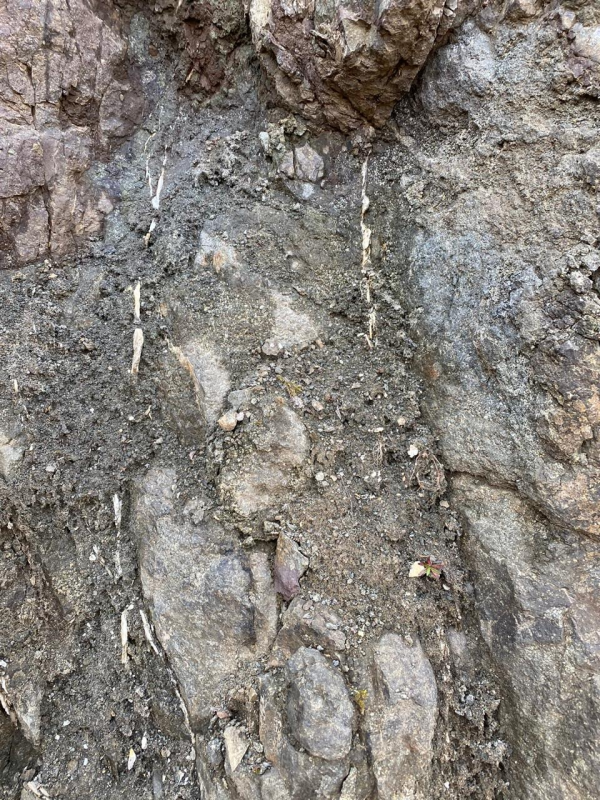 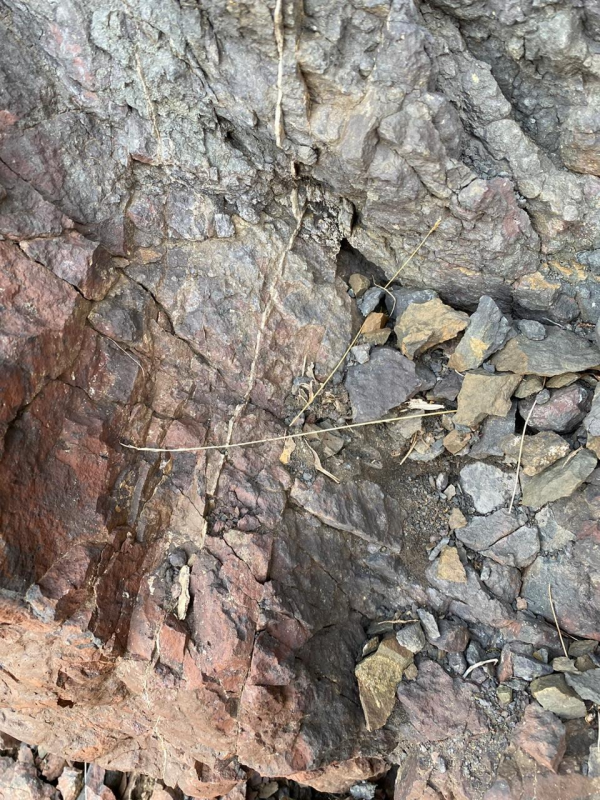 Picture 3. Close up of a Quartz Vein from an Outcrop on Trolla 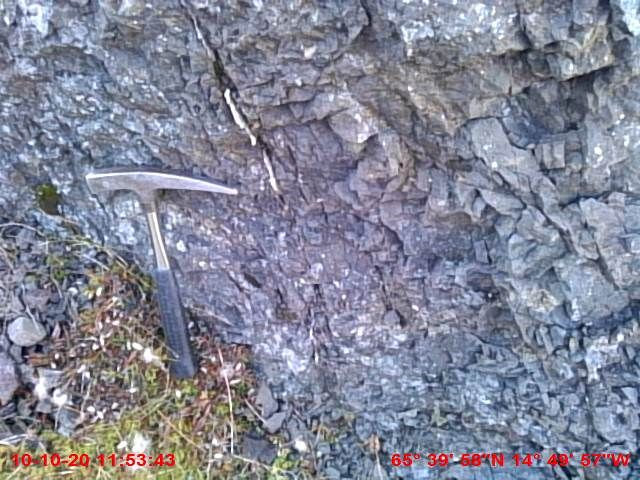 Vilhjalmur Thor Vilhjalmsson, President and CEO of St-Georges Eco-Mining Corp. commented: “(…) this is an important milestone for St-Georges and will enable the Company to be more aggressive in its exploration of Iceland geological and mining potential. (…) We look forward to advancing the projects already established and to discover additional potential across the whole country. We are committed to regularly informing our shareholders on the progress of work in the field. Most of Iceland can be explored for minerals all year long. This allows us to modulate our efforts in relation to the earned value of the different project timelines and keep being constantly active on the Thor Gold flagship project. Having full ownership of Thor enables us to develop the project on our terms, maximizing the impact of the results while keeping the financial pressure and the share count dilution under control (…)”.

St-Georges is developing new technologies to solve some of the most common environmental problems in the mining industry.

The Company controls directly or indirectly, through rights of first refusal, all of the active mineral tenures in Iceland. It also explores for nickel on the Julie Nickel Project & for industrial minerals on Quebec’s North Shore and for lithium and rare metals in Northern Quebec and in the Abitibi region. Headquartered in Montreal, St-Georges’ stock is listed on the CSE under the symbol SX, on the US OTC under the Symbol SXOOF and on the Frankfurt Stock Exchange under the symbol 85G1.

Located in the North Atlantic, approximately midway between Greenland and Great Britain, the warm North Atlantic Current ensures that the climate in Iceland, described as subpolar, oceanic, has generally higher temperatures than locations of similar latitude throughout the world.  Regions or places that have similar climate are Tierra del Fuego, the Aleutian Islands and Alaskan Peninsula.  Although Iceland lies close to the Arctic, its coasts remain ice-free year-round.

As can be expected, the southern coast is generally warmer, wetter and windier than the northern coast.  The lower-lying, inland areas in the north are the most arid, although snowfall in the north during the winter months is greater than in the south.

Historically, recorded temperature extremes for the country are 30.5 C and -38.0C.  The high in Reykjavik was 26.2C in 2008, and the low there was -24.5C in 1918.  Although the Icelandic climate can be harsh, the GÍ-Melmi JV completed a drilling program at Thormodsdalur (Thor Gold Project) from November 2005 through May 2006 without undue difficulty.  In the north, the increased snowfall would make an effort such as this more difficult.  Reconnaissance is to be limited to the summer months.

Iceland’s infrastructure is well developed and modern.  Road construction was begun around the start of the 20th century and peaked during the 1980’s.  The roads are well constructed and maintained asphalt, although some gravel roads are still found.  The current road system connects most of the larger towns and villages and is mostly confined to the coastal areas.  Currently, there are a total of 12,691 kilometers of roads in Iceland that includes 3,262 kilometers of paved surface.  Inland road access diminishes to dirt roads to no roads making access to some areas difficult, requiring foot travel or helicopter support.   There are no railroads in Iceland.

Iceland occurs at the junction of two large physical structures; the Mid Atlantic Ridge and the Greenland-Iceland-Faeroes Ridge (Figure 9). At this intersection, the mantle is hotter and less dense than the surrounding mantle. The mantle material rises as a result of heat and chemical-related density differences resulting in a dome in the crust above. This hotspot is causing a higher rate of extrusive volcanism at this point on the Mid Atlantic Ridge, which has, in turn, caused the region to be built up to a level more than 3 kilometers above the surrounding seafloor and covers an area of more than 350,000 km2.   This is known as the Iceland Basalt Plateau. The portion of the plateau above sea level is now the country of Iceland (Martin, et al., 2007). 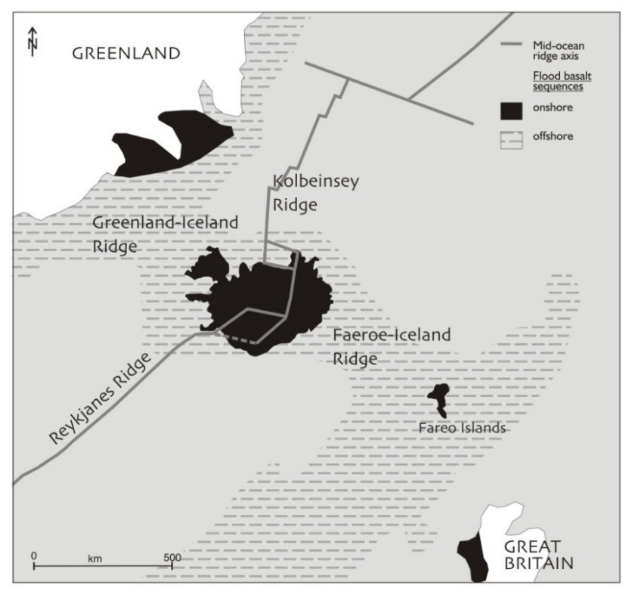 In the Mid Atlantic Rift environment, the central portions of Iceland have moved outwards, away from the zones of active rifting and crustal development such that oldest rocks occur towards the margins and youngest in the center.  Due to the migration of the hotspot to the south-east with time, an asymmetry has been imparted to the shape of the island.  Currently, the hotspot lies under the south-eastern quadrant of the island (Corbett, 2004).  This area now denotes the zone of active rifting and volcanism.  Figure 10 shows the geology of Iceland defined by tectonic zones that coincide with the ages of the rocks. 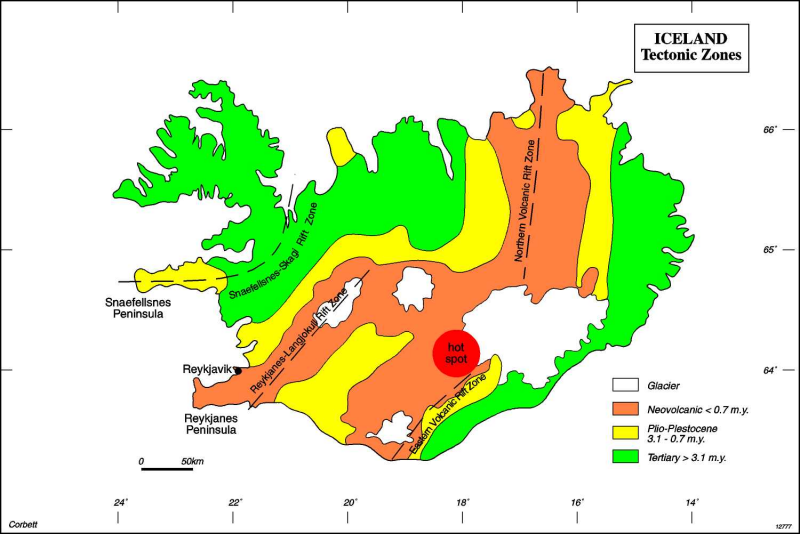 The significant rift systems that have focused volcanism through time are noted below.

Structurally, NE fractures reflect the spreading centre direction and are, therefore, some of the most numerous and laterally extensive fracture patterns, commonly evident as normal faults that may be exploited by dykes.  NS and ENE fractures are developed as conjugate fractures during the NW-SE extension.