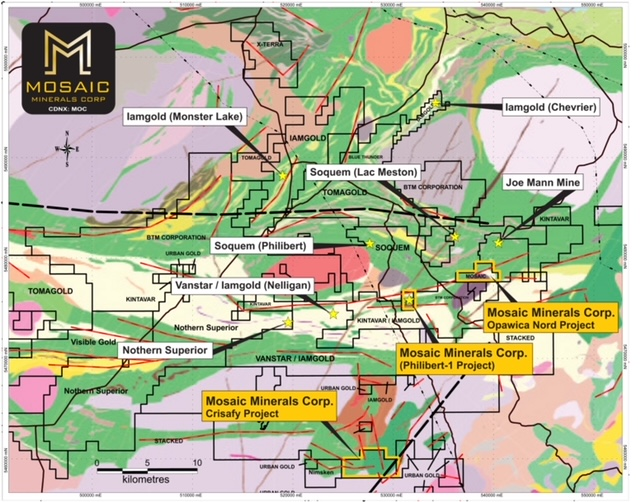 
The Crisafy Properties acquisition expands upon Mosaic’s original Opawica Gold Project located in the eastern extension and along strike of the significant gold discoveries at Lac Surprise and Nelligan.

Maurice Giroux CEO declare: “We are very pleased to enlarge Mosaic’s footprint in the area of Quebec’s most prolific gold discoveries. Being personally, in a certain way, the instigator of this exploration explosion as CEO of Stellar AfricaGold Inc., when in 2011 Stellar discovered the Monster Lake gold deposit which was later sold to Tomagold and in turn optioned by Iamgold. Based on my history Mosaic has a close and personal knowledge of the potential of this area, and this knowledge can only be very beneficial to Mosaic.”

The purchase consideration for the Crisafy Property is $5,000 and the issuance of 300,000 common shares at the closing of the Purchase Agreement. Two (2) additional payments of $5,000 each will be made at three months and 12 months after the closing date. The Vendor will retain a 1.5% Net Smelter Return royalty which may be purchased by Mosaic for the sum of Five Hundred Thousand ($500,000) dollars at any time. This transaction is arm’s length.

Mosaic is gold-focused concentrating its exploration efforts where the Company’s growth potential is the strongest. After incorporation Mosaic acquired Stellar’s Opawica project in a 100% share deal. Mosaic then completed a Plan of Arrangement with Stellar establishing a shareholder base of more than 1,000 new Mosaic shareholders. Since the acquisition Mosaic has actively explored Opawica completing its Phase I exploration program at the end of 2019 with results that warrant advancing with a Phase II program.

Opawica is comprised of two claim blocks, the Philibert I and the Opawica North, both located a few kilometers East and in the geological and structural strike of the Nelligan Iamgold/Vanstar project. Surface sampling of the Philbert-I block showing by Laurentia Exploration during the 43-101 Technical Report field visit confirmed Stellar’s and other historical results returning gold grades of up to 9.24 g/t Au in some channel sampling of quartz injected structures. The gold mineralization is associated with millimetric to metric wide quartz-tourmaline veins structure cutting through the Obatogamau rock of Philibert-I block. These veins are observed across a 50-meter-long rock exposure and strike N 1100. Quartz veins contain tourmaline and pyrite and lies within an epidote-iron carbonates alteration envelope and most importantly, the structure is open laterally and vertically.

In December 2018, Mosaic mandated Dynamic Discovery to perform a resistivity and Induced Polarization (IP) coverage of the Philbert Block to increase the understanding of the geophysical characteristics of the Philbert-I gold showing. In conclusion, the geophysical response of the gold mineralization found within the property was better characterised, assisting with the selection of priority exploration targets. A total of 200 individual IP anomalies, further grouped as 47 chargeable lineaments, were defined. Among them, 11 axes are considered with higher potential to relate to mineralized occurrences and constitute high priority drilling targets.

Mosaic benefits from a solid board of directors and strong executive management. Its members have documented business histories, successful exploration backgrounds, impressive histories of mine discoveries in Canada and Africa, and established records of corporate success.

Mosaic President and CEO Maurice Giroux when he was CEO of Stellar AfricaGold Inc. lead the team that made the Monster Lake – Zone 325 high grade gold discovery which became the foundation project of Tomagold Inc., and was subsequently optioned by Iamgold Corp. Later on, Iamgold optioned the Nelligan Project that was awarded “Discovery of the Year” at the Xplor Mining convention in Montreal in 2019.

The technical content of this press release has been reviewed and approved by Éric Allard, an independent consultant and a Qualified Person as defined in NI 43-101.

On Behalf of the Board

This release may contain "forward-looking information" as defined under applicable Canadian securities laws. Forward-looking information reflects the Company’s current internal expectations or beliefs and is based on information currently available to the Company. In some cases, forward-looking information can be identified by terminology such as "may", “would”, "will", "should", "expect", "intend", "plan", "anticipate", "believe", "estimate", "projects", "potential", "scheduled", "forecast", "budget" or the negative of those terms or other comparable terminology. Forward looking information is based upon assumptions and many of these assumptions are based on factors and events that are not within the control of the Company, and there is no assurance they will prove to be correct or accurate. Risk factors that could cause actual results to differ materially from those predicted herein include, without limitation: that the business prospects and opportunities of the Company will not proceed as anticipated; changes in the global prices for gold or certain other commodities (such as diesel, aluminum and electricity); changes in U.S. dollar and other currency exchange rates, interest rates or gold lease rates; risks arising from holding derivative instruments; the level of liquidity and capital resources; access to capital markets, financing and interest rates; mining tax regimes; ability to successfully integrate acquired assets; legislative, political or economic developments in the jurisdictions in which the Company carries on business; operating or technical difficulties in connection with mining or development activities; laws and regulations governing the protection of the environment; employee relations; availability and increasing costs associated with mining inputs and labour; the speculative nature of exploration and development; contests over title to properties, particularly title to undeveloped properties; and the risks involved in the exploration, development and mining business. Risks and unknowns inherent in all projects include the inaccuracy of estimated reserves and resources, metallurgical recoveries, capital and operating costs of such projects, and the future prices for the relevant minerals.

The Canadian Securities Exchange has not reviewed and does not accept responsibility for the adequacy or accuracy of this release.

Trading in the securities of this company should be considered speculative.