Toronto, Ontario - TheNewswire - February 2, 2022 - AFR NuVenture Resources Inc. (the "Company") [TSXV:AFR] announces that it has entered into a letter of intent dated February 1, 2022 (the “LOI”) with private exploration company Edge Exploration Inc. (“Edge”). Pursuant to the LOI, the Company may earn up to a 100% interest in five (5) claim groups (collectively described as "Properties" or individually as "Property") by funding exploration programs to investigate known and inferred bedrock mineralization containing gold, silver, base metals, tungsten, molybdenum, rare earths, and other traditionally sought elements and green revolution elements. The Properties comprise the following New Brunswick mineral claims:

Claim 8300 Little Mactaquac Stream (3,499.3 ha), for a total of 9,277.1 ha and such other claims held or acquired by purchase or option by either party or non-arms-length parties, or within 5 km of the respective boundaries of the Properties which shall form part of the Properties.

Edge has discovered highly anomalous gold and silver in till in an area that is a mirror image geologically to the setting at Clarence Stream where Galway Metals is conducting a major program of diamond drilling. The claims in Edge’s Utopia Project (the “Utopia Claims”) are Dam Lake (#9387), Wellington Lake (#9590) and (Linton Stream (#9591). In relation to Galway Metals’ property which is on the northwest side of the St. George Granitic complex, the Utopia Claims are located on the opposite (south) side (see attached maps) of the St. George Granitic complex, which itself, is associated with numerous occurrences of tin, antimony and molybdenum, tungsten and indium. Geologically, southwestern New Brunswick historically has a granite-related ‘metallogenic province’ for these metals. However, gold in this area was discovered only relatively recently in 1998 by a local prospector at a place called Clarence Stream. The first real news of this came from exploration programs of Freewest Resources Canada in the early 2000s.

On November 18, 2021, Galway Metals announced full and partial assay results from numerous drill holes in the center of, and along either side of, the remaining 400m gap between the Richard and George Murphy Zones (GMZ) at its Clarence Stream gold project. In its release, Robert Hinchcliffe, President and CEO of Galway Metals, said "Galway has now essentially connected a total of 3 kilometers of mineralization comprising the Adrian, GMZ, Richard and Jubilee Zones. These zones, as well as the South and North Zones, remain open for expansion, have great grade and continuity, and will be included in the upcoming resource estimate update slated for December 2021," and further, "With the gold markets seemingly gaining traction, we look forward to an exciting 2022 where our drilling program will be focused on making new discoveries, following up on recent discoveries and expanding existing zones. In short, we remain optimistic as results continue to demonstrate that Clarence Stream is an important new gold district in North America."

In a subsequent press release dated December 7, 2021, Galway Metals stated, “The Clarence Stream resource update targeted for this month is now scheduled for the first quarter. Galway has in excess of 8,000 samples pending assay results at the labs. There is generally an 8-12 week delay in receiving results, and the Company would like to incorporate key pending assays into the update. This area too is key to the resource because it could combine two pits into one. Galway plans on incorporating all zones discussed in this press release, Adrian, GMZ, Richard and Jubilee, which cover a strike length of 3.1km, as well as the existing South and North Zones, into the resource update.”

At Utopia, highly anomalous gold values in till, up to 4.8 g/t and silver up to 249 g/t in one hole and 1.8 g/t gold in another hole 440 meters along strike, were discovered as a result of an overburden drilling program conducted by Edge in an area extensively covered by glacial deposits, both outwash and basal till. The significance of these results is that gold in till and soil have largely guided the discovery of gold and the exploration success of Galway Metals. Initial exploration plans include drill testing at least two Edge properties; the Utopia Dam Lake claim, and the Mactaquac property where placer gold was discovered in a stream in 2017. Noranda reported up to 405 ppb gold in soils near the Mactaquac location and subsequent MMI and standard soil survey results of Edge show the presence of anomalous gold.

Company Director, Douglas Hunter, P.Geo., said, “We are excited by our prospects of working with Edge Exploration. Edge’s work over the last few years has resulted in compelling discoveries of gold prospects in a new, emerging gold mining area. I regard New Brunswick to be one of the best mining jurisdictions for exploration and mining in Canada, perhaps, at this moment, the world. This view, at least for Canada, seems to be shared by other companies, such as Galway Metals and Brunswick Exploration, both of which, have large property holdings and ongoing aggressive gold and polymetallic exploration programs”. In a corporate presentation published by Brunswick Exploration in October 2021, they stated that the key takeaways regarding their Fundy Gold – New Brunswick Gold/Polymetallic project were:

The Company has an Option to earn initially a 50% interest in the Properties by spending $1,800,000 on exploration expenditures on any of the Properties, making cash payments of $264,000, and making share payments of 300,000 common shares of the Company by the third anniversary of the effective date of this transaction (the “Effective Date”) which shall be the date that a definitive agreement is signed by the Company and Edge.

If the Company earns a 50% interest in the Properties, it shall have the option to earn an additional 25% interest (for a total of 75%) by making additional expenditures of $4,000,000 and paying to Edge an additional 2,000,000 shares of AFR by the fifth anniversary of the Effective Date.

Edge will retain a 2% NSR in the Properties (the “Edge Royalty”). If the Company, at its option, earns either a 50% or 75% interest in the Properties, resulting in a joint venture between the parties, and if thereafter either party fails to contribute its share of future expenditures, a standard non-contributor dilution will reduce such party’s interest to a 2% NSR once the minority party falls below a 10% interest (the “Non-contributor’s Royalty”). One half of either the Edge Royalty or the Non-Contributor’s Royalty (1% NSR) may be purchased for $1,000,000 at any time by the other party.

It is anticipated that part of the exploration expenditures may be recoverable through New Brunswick Junior Mining Assistance Program grants. This transaction is subject to all necessary regulatory authorities and TSX Venture Exchange requirements and approvals.

John F. O’Donnell, Chairman and C.E.O. stated: “I am very excited and pleased that this opportunity has come to us, and I am looking forward to our team working with Dallas Davis and his professional team at Edge to develop this outstanding prospect”.

On January 4, 2022, the Company announced it has completed the field work on its geophysical program at the Silver Bell-St. Lawrence (“SBSL”) project (the “Project”) near Virginia City, Montana. As reported in the Company’s press release dated December 7, 2021, the program, being conducted by Clark Jorgensen of Big Sky Geophysics, Bozeman, Montana in consultation with Dr. John Childs, included magnetic and resistivity/induced polarization (IP) surveys. The purpose of the program is to attempt to identify and define mineralized veins and establish drill targets on the Project. The Company has been advised by Clark Jorgensen that he expects the data to be all processed and ready by the first week in February. We will provide an update when the results are received and are interpreted.

On behalf of the Board of Directors,

For more information on the Company, investors should review the Company's filings on SEDAR at www.sedar.com and our website at www.afrnuventure.com .

Douglas Hunter, P.Geo., is the Qualified Person responsible for the technical information contained in this press release.

This news release contains "forward-looking information" (within the meaning of applicable Canadian securities laws) and "forward-looking statements" (within the meaning of the U.S. Private Securities Litigation Reform Act of 1995). Such statements or information are identified with words such as "anticipate", "believe", "expect", "plan", "intend", "potential", "estimate", "propose", "project", "outlook", "foresee" or similar words suggesting future outcomes or statements regarding an outlook.

Such statements include, among others, those concerning the Company’s expectations regarding the finalization and approval of the proposed transaction, the Company's exploration and expenditure plans, including the fact that it is anticipating the receipt of the data obtained from the field work on the Montana project and its intention to provide an update when the results are received and interpreted, and its anticipation of possible recovery of exploration expenditures through grants. Such statements also include the expectations and beliefs of the Company and others regarding the future of the subject area of New Brunswick as an important new gold district in North America. Such forward-looking information or statements are based on a number of risks, uncertainties and assumptions which may cause actual results or other expectations to differ materially from those anticipated and which may prove to be incorrect. Assumptions have been made regarding, among other things, management's expectations regarding its ability to initiate and complete future exploration work as expected and acquire and finance other projects. Actual results could differ materially due to a number of factors, including, without limitation, operational risks in the completion of the Company's future exploration work, technical, safety or regulatory issues, social and market conditions related to the COVID-19 global pandemic; the worldwide economic and social impact of COVID-19; the duration and extent of COVID-19; changes in general economic conditions; the imposition of government restrictions on business related to COVID-19, any positive cases of COVID-19 at a project site or in the area which may cause a reduction or suspension in operations and activities which may ultimately affect and delay the exploration timeline. 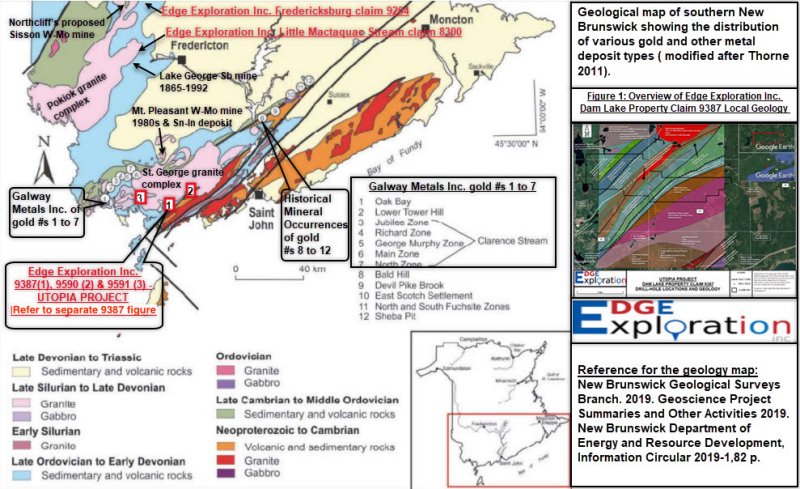 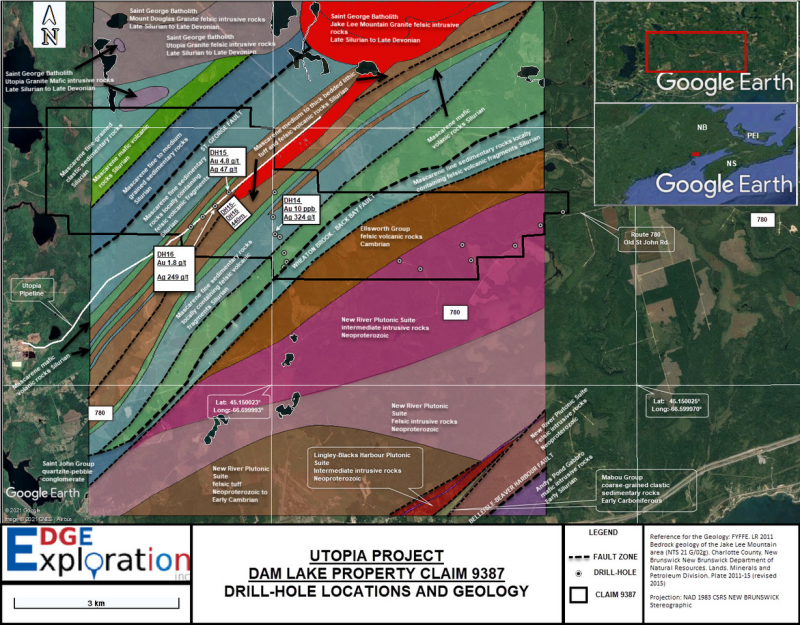