Vancouver, British Columbia - TheNewswire - June 17, 2021 - Goldeneye Resources Corp. (“Goldeneye”) or the “Company”) (TSXV:GOE) is pleased to announce that the Company has signed Definitive Agreements with Unity Resources Inc. (“Unity”) to acquire 100% interest in mineral claims known as the Roberts Arm, Grand Lake and the Gander River Ultramafic Belt East (“GRUBE”) Project (together “the Projects”). The Projects are located in the province of Newfoundland and cumulatively encompass a land area of approximately 148 Km² (~14,800 Ha). The Company had announced on June 7, 2021 2 LOI’s that now have become definitive agreements. The agreements require TSX-V approval.

Jack Bal, Chief Executive Officer of Goldeneye, commented: “We have worked hard to take the LOI’s to definitive agreements. Newfoundland has gained a lot of attention with new high-grade gold discoveries such as the Keats Zone. Our GRUBE Project has geologic attributes similar to that area and we are excited to learn more about the project this field season. The Roberts Arm and Grand Lake Projects have proven targets to be followed up on for high grade Copper and Gold. Now that the definitive Agreements have been signed we plan to conduct work on all properties this summer.”

Location Map of the Projects 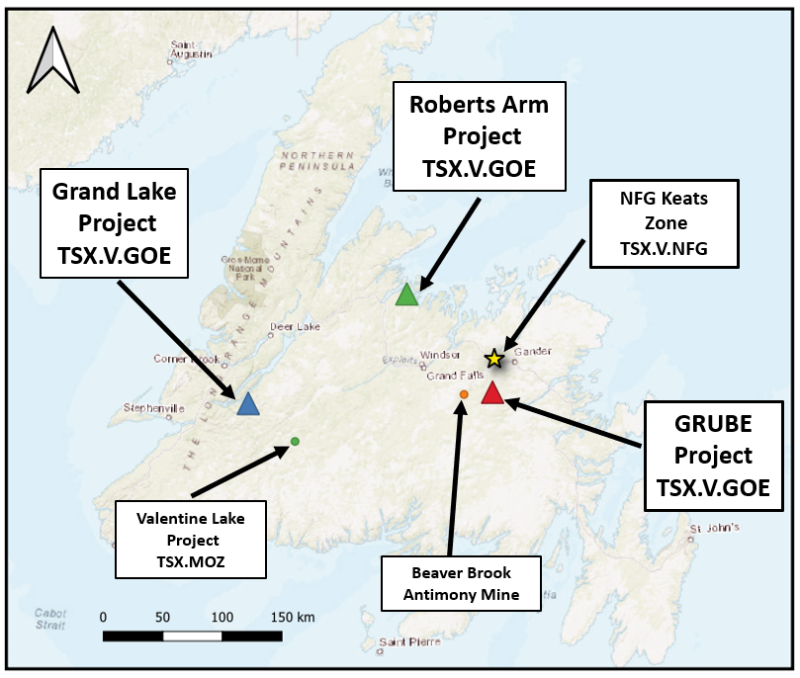 The GRUBE Project encompasses a land area of approximately 76.5 Km² (7,650 Ha) and is located directly adjacent to the eastern extent of New Found Gold’s Queensway Project.

The Projects geology consists of polydeformed psammites and pelites of the Lower Ordovician or earlier Gander Group, and a greywacke, siltstone, shale sequence which is part of the Middle Ordovician and later Davidsville Group.  In certain areas the Davidsville Group sediments may lie conformably on the Gander Group metasediments, but as typified in the north the two are often separated by the Gander River Ultramafic Belt (GRUB line), a dismembered ophiolite tectonically emplaced on the Gander Group (Blackwood, 1980 or MODS 002D/10/Be 001).

The GRUB line is thought to be a potential corridor for the transportation of gold mineralization in the area. Gold is currently being discovered at the Keats, Knob, and Lotto Zones approximately 20 km’s to the north in secondary and tertiary structures potentially following a epizonal gold deposit model. The GRUBE Project has geology that suggests the potential to host similar structures associated with the GRUB line regional fault zone.

The Grand Lake Project encompasses a land area of approximately 52 Km² (5,200 Ha) and is located 33 km southwest of the town of Corner Brook, Newfoundland. Access to the Project is by helicopter or by boat from Grand Lake plus a 2.5 km traverse up Ridge Creek.

Descriptions of five of the most significant MODS on the property are as follows:

Grab sample DE-95-08 (quartz vein) collected from the Crescent Lake mine dump assayed 4.84% Cu, <0.01 %Pb, 0.06% Zn, 22 ppb Au, 8.5 ppm Ag, 50 ppm Ba, 143.0 ppm As and 2.8 ppm Sb (Evans,1996). Two ore dumps on the property have been chip sampled along cross lines 9.1 m and 7.6 m apart.  The assay results on each cross-line were weighted according to the cross-sectional area which each sample represented.  From this, the average grade of each cross section of the dump was calculated.  Each of these average grades was weighted according to the volume which each cross- section represented.  Thus the overall average grade of the dumps was calculated:

About the Purchase Agreements

The terms of the Agreement to acquire the North Arm Project and Grand Lake Gold Project:

Unity will retain a 3% NSR. The Royalty will be governed by a separate royalty agreement. The royalty agreement will include right of first offer to acquire 66.67% of the Royalty (equal to a 2% net smelter return royalty) for a cash payment of $1,500,000.

The terms of the Agreement to acquire the GRUBE Project:

Unity will retain a 3% NSR. The Royalty will be governed by a separate royalty agreement. The royalty agreement will include right of first offer to acquire 66.67% of the Royalty (equal to a 2% net smelter return royalty) for a cash payment of $1,500,000.

Nicholas Rodway, P.Geo, is a shareholder of the company and qualified person as defined by National Instrument 43-101. Mr. Rodway supervised the preparation of the technical information in this news release.

All MODS data referenced above can be sourced at the following Newfoundland and Labrador web link: https://gis.geosurv.gov.nl.ca/

Goldeneye is a mineral exploration company engaged in exploration of precious metal and base metal project in North America.

On behalf of the Board of Directors

This news release contains certain forward-looking statements within the meaning of Canadian securities laws, including statements regarding the Private Placement and Share Consolidation of Goldeneye Resources Corp. (“Goldeneye”); the availability of capital and finance for Goldeneye to execute its strategy going forward. Forward-looking statements are based on estimates and assumptions made by Goldeneye in light of its experience and perception of current and expected future developments, as well as other factors that Goldeneye believes are appropriate in the circumstances. Many factors could cause Goldeneye’s results, performance or achievements to differ materially from those expressed or implied by the forward looking statements, including: discrepancies between actual and estimated results from exploration and development and operating risks, dependence on early exploration stage concessions; uninsurable risks; competition; regulatory restrictions, including environmental regulatory restrictions and liability; currency fluctuations; defective title to mineral claims or property and dependence on key employees. Forward-looking statements are based on the expectations and opinions of the Company’s management on the date the statements are made. The assumptions used in the preparation of such statements, although considered reasonable at the time of preparation, may prove to be imprecise and, as such, undue reliance should not be placed on forward-looking statements. The Company expressly disclaims any intention or obligation to update or revise any forward-looking statements whether as a result of new information, future events or otherwise.