Vancouver, B.C. - TheNewswire - July 2, 2020 - Alianza Minerals Ltd. (TSXV:ANZ) (OTC:TARSF) ("Alianza" or the "Company") reports that crews have completed six holes totalling 1,770 metres (5805 feet) of reverse-circulation ("RC") drilling at the Horsethief Gold Property, Nevada. This work is funded by partner Hochschild Mining (US), a subsidiary of Hochschild Mining PLC ("Hochschild", LSE:HOC) under an option to earn a 60% interest in the project by funding exploration expenditures of US$5 million over 5.5 years. The crew has left site for a mandated break and will return to finish the program on or about July 10.

Six holes have been completed to date, with five reaching target depth. One hole (20HT-RC005) was terminated at 183 metres (600 feet) when it intersected a large void and could not continue. Two holes were completed at the Horsethief North target area, three in the Horsethief South area and one was collared to test the Mustang IP target at depth. Logging is complete and all samples have been shipped to the laboratory for analysis. Analytical results from the initial holes of the 2020 program are expected to be received in mid-July.

Drilling will resume at the Stallion target when crews restart the program. A map of the drill hole collar locations is shown below. 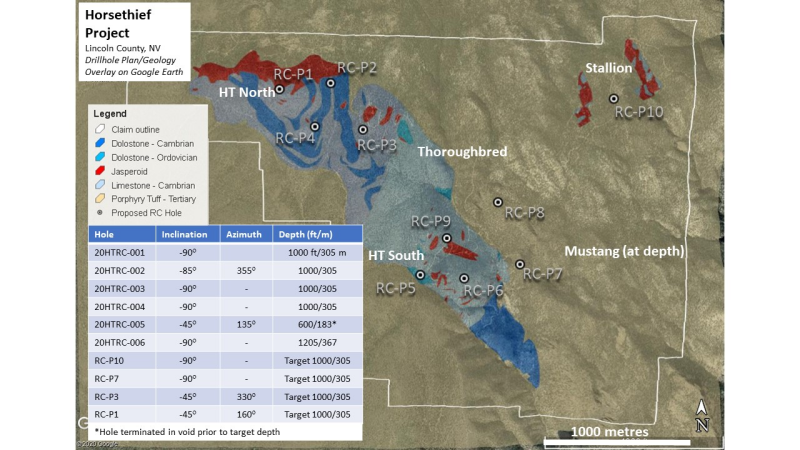 Horsethief is located 16 miles (25 km) east of the historic mining town of Pioche, NV. Under the current Notice of Intent ("NOI"), approved by the United States Bureau of Land Management ("BLM") allows for up to 3,000 metres of drilling in ten holes.

Additionally, the Company has mobilized a geophysical crew to conduct approximately 20 line-kilometres of magnetics and 5 line-kilometres of Induced Polarization (IP) survey, extending the existing survey coverage. This is work is undertaken to investigate newly acquired claims that were not included in the original survey.

"We are pleased with our progress at Horsethief with our first drill-test of the property," stated Jason Weber, P.Geo., President and CEO of Alianza. "Our crews from Big Rock Exploration and Major Drilling have done a great job executing the program, especially as we all adapt to operate safely in light of the current health crisis."

Drilling at Horsethief follows a very successful 2019 program that included detailed mapping focussed on lithology, structure and alteration of the prospective limestone and dolostone stratigraphy exposed at Horsethief. Significantly, based on lithological characteristics and fossil identification, this work confidently assigned stratigraphic ages ranging from upper Cambrian to lower Ordovician. This is an important age determination as it corresponds to the ages of rocks hosting other major deposits such as the Long Canyon Gold Mine.

Additionally, the 2019 work program identified a new window of upper Cambrian to lower Ordovician-aged carbonate stratigraphy with significant jasperoid alteration in the northeast portion of the property. An additional 26 claims were staked to cover this occurrence as well as prospective stratigraphy identified in the southern portion of the property.

Alianza employs a hybrid business model of joint venture funding and self-funded projects to maximize opportunity for exploration success. The Company currently has gold, silver and base metal projects in Yukon Territory, British Columbia, Nevada, Colorado and Peru. Alianza currently has two projects optioned out in Nevada and Yukon Territory, and is actively exploring on two others. Alianza's current partners include Hochschild Mining PLC and Coeur Mining, Inc.

Mr. Jason Weber, P.Geo., President and CEO of Alianza Minerals Ltd. is a Qualified Person as defined by National Instrument 43-101. Mr. Weber supervised the preparation of the technical information contained in this release.