Results obtained from channels cut perpendicular to the strike of mineralization at Lalonde and Victoria in July include; 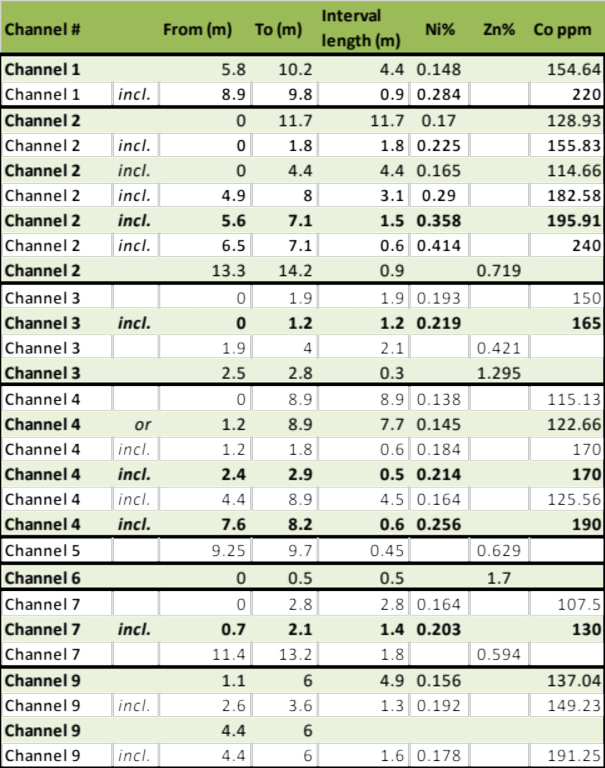 Renforth had already commenced the follow up stripping program which is now ongoing at Lalonde as the mineralization encountered in July was visually apparent in the channel samples, as well as confirmed in the field at the time of sampling using an XRF by our geological team. The confirmation in the field allowed planning and permitting for the Sept/Oct stripping program to proceed, now the receipt of results from the lab validates Renforth's continued exploration at Lalonde.

At Victoria, exploratory channels were cut to test for the presence of the field interpreted second mineralized horizon to the north of the previously stripped and drilled southern horizon. The channel results, in conjunction with our geophysical data and field evidence confirm that there is in fact a second, northern horizon of mineralization which our drilling, over 2.2km, at Victoria did not intersect.  We now know that we only stripped and drilled the southern mineralized horizon. Field results and experience obtained at Victoria, along with our data for Lalonde, caused us to design the current stripping program at Lalonde to run perpendicular to the strike of mineralization in order to capture any parallel mineralized horizons, further discussed below and illustrated in the map.

The July channel sampling delivered the best nickel values from the calc-silicate altered ultramafics within 10 or so meters south of the southern most albitized shear zone. The shear zone itself contains sphalerite and sometimes chalcopyrite within and immediately around the shear zone. At Lalonde and at Victoria (~3.7km to the south) the nickel is usually found in the ultramafics (albitized or calc-silicate altered) “within the vicinity” of the shear zone and occasionally in the contact zone with sediments. 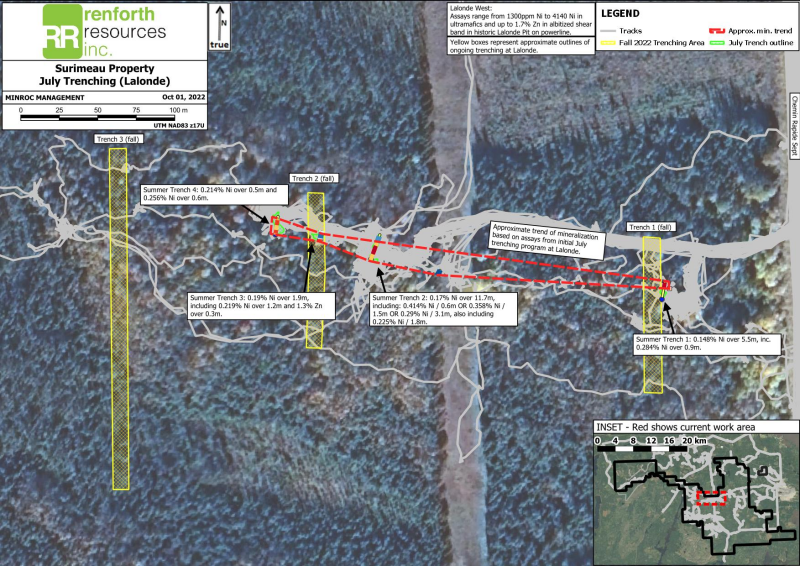 Our discovery that we only addressed half of the mineralization in the area we stripped and drilled at Victoria, demonstrated by our results in the field, including the channels reported on in this press release, and supported by our Mag/EM survey (flown after our 2021 drilling/stripping/drilling work at Victoria), caused our field geologists to approach Lalonde with their recent Victoria experience in mind, looking for more than one horizon. Rather than stripping along strike (as we did at Victoria) to expose as much mineralization as we could, we instead decided to strip across strike with three smaller trenches, designed to uncover any possible parallel mineralized horizons.

As of Thursday September 29th, when our geologists made a site visit, the update is as follows;

The first two trenches are stripped, washed, and cut. The third trench is about 70% complete as of Thursday morning. All three trenches expose the same sequence of units with massive ultramafics to the south, and sediments to the north. The first two trenches expose two parallel, 1-4m thick mineralized shear zones at the contact zone between the ultramafics and the sediments. The third trench exposes one of the shear zones at the current northern extent of the trenching, however, the second shear zone is likely just beyond the current northern end of the trench and will hopefully be exposed over the next few days. All units are oriented roughly W-NW / E-SE and dip north. The exposures look essentially the same as the Victoria trenching. Since we did not chisel out any samples, mineralization was tough to see, however, the strongest nickel mineralization will likely be found in the bands of calc-silicate altered ultramafics south of the shear zones. Although the exact width of this unit is not yet known, it was observed in the trenching program completed in July and it is likely that its entire width is exposed in the new trenches. The shear zones exposed are albitized and contain relatively strong mineralization as well, 10-15% overall, including pyrite, sphalerite, and traces of chalcopyrite.

Samples presented in this press release were selected, bagged, and tagged in the field under the supervision of Francis R. Newton P. Geo (OGQ#2129) and personally delivered to the facilities of ALS Geochemistry in Val d’Or, Quebec, for analysis using the ME-MS89L assay methodology (Trace Level Lithium Exploration by Na-Peroxide Fusion).

Technical disclosure in this press release has been reviewed and approved by Francis R. Newton P.Geo (OGQ#2129), a “qualified person” pursuant to NI 43-101.

Renforth also holds the Nixon-Bartleman property, west of Timmins Ontario, with gold present on surface over a strike length of ~500m.