Calgary, Canada – TheNewswire - May 11, 2022 – Crestview Exploration Inc. (CSE:CRS), (Frankfurt:CE7) (“Crestview” or “the Company”) is encouraged by the recent exploration activity carried out by American Pacific Mining on their Tuscarora project which is located approximately 2 km NE of Crestview’s Castile Mountain prospect. The Castile Mountain property is one of three prospects in the Tuscarora district held by Crestview including the Rock Creek and Divide prospects which are located approximately 12 kilometers north-northwest.

American Pacific Mining (APM) announced completion of drilling of 13 of a possible 70 holes at its Tuscarora play, where APM reported chip and surface samples containing up to 21,032 g/t Au and 38,820 g/t Ag. Another sample which reportedly contained 2,850 g/t Au is within approximately 3.8 km of Crestview’s Castile Mountain prospect to the SW. APM is targeting a low sulfidation epithermal vein system, similar to Crestview’s target concept at Castile. 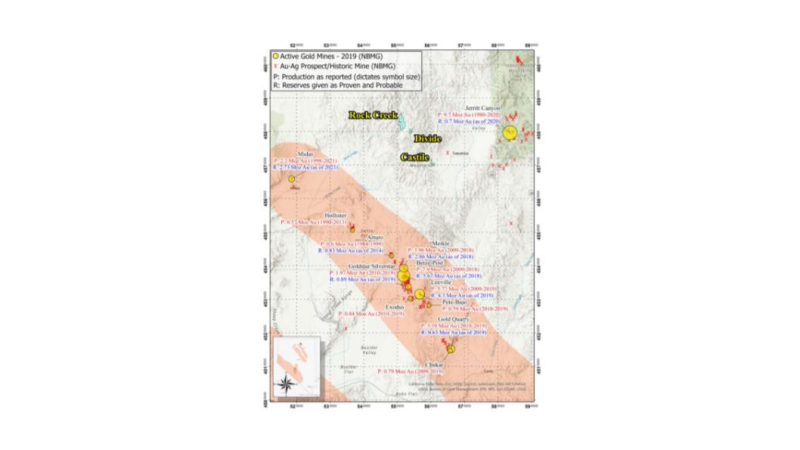 Chris Wensley, CEO, commented “We are encouraged by the sampling results and current drilling activity reported by American Pacific Mining on its nearby claims and what this means for Crestview Exploration Inc in terms of validating our footprint and exploration program in the area.”

The surface footprint of gold mineralization identified by APM suggests the potential for a much larger and more extensive mineralizing system around the historic pit lake. Moreover, the Tuscarora mining district is located just NE of the prolific Carlin Trend in Elko County, NV, and is in close proximity to major gold deposits on 3 sides (Figure 1), including: the Midas mine, which has produced more than 2.2 Moz Au 26.9 Moz Ag and has proven and probable reserves amounting to another 2.73 Moz Au and 199.92 Moz Ag from an epithermal Ag (Au) deposit (Hecla Mining Company Website – 2022), is located approximately 35 km to the west-southwest (WSW); the Goldstrike operation, which includes both the Betze-Post open pit and the Meikle underground and boasts a combined 11.88 Moz Au production with another 8.53 Moz Au of proven and probable reserves from a Carlin-type gold deposit (Technical Report on the  Goldstrike Mine, Eureka and Elko Counties, State of Nevada, USA NI 43-101 Report – 2019), is located approximately 45 km to the south (S); and the Jerritt Canyon mine, which has produced an incredible 9.7 Moz Au from a Carlin-type gold deposit, is located approximately 30 km to the east (further from the Carlin Trend than the Tuscarora Complex; Technical Report on the Jerritt Canyon Mine, Elko County,Nevada, USA Report for NI 43-101 – 2021).

More than an attractive address, there are indicators for an underlying gold system at all of Crestview’s Tuscarora properties. An MMI soil and SGH gas survey was conducted in the southern portion of the Rock Creek property by Ironwood Gold Corp in 2010, which outlined a gold-arsenic anomaly running approximately N-S (Amended Technical Report Rock Creek Project Rock Creek Mining District, 2019). Anomalous gold and silver values have been documented in outcrop and grab sampling from across the properties (see CRS NR dated December 21st, 2021). Moreover, the Divide Mine prospect was host to minor production in the late 1800s to early 1900s (Bonanza Silver Corporation – The Falcon Mine Project Elko County, NV, 2000).

Crestview is in the process of finalizing preparations for the commencement of CSAMT surveying at our Tuscarora properties to be followed by a drill program at the Company’s flagship Rock Creek/Divide properties in the coming summer / fall season.

This News Release was prepared by J.A. Lowe, M.Sc. Geology. Brian T. Brewer, M.Sc., CPG #11508, is a Qualified Person as defined by NI 43-101 and has reviewed and approved the scientific and technical disclosure in this news release.

Crestview Exploration is a technology driven, well-funded and experienced exploration company focused on finding gold and silver deposits in mining friendly jurisdictions. The Crestview’s projects Rock Creek, Divide, and Castile Mountain are situated in the Tuscarora Mountains of northern Elko County, Nevada. The company’s Tuscarora properties combined comprise a total of 101 unpatented lode mining claims, with 74 claims at Rock Creek, 19 claims at Divide, and 8 claims at Castile Mountain.  The Cimarron project is located in the San Antonio Mountains of Nye County, Nevada, and is comprised of 31 unpatented lode mining claims, including control of 6 historically producing claims associated with the historic San Antonio mine.

This news release includes certain information that may be deemed “forward-looking information” under applicable securities laws. All statements in this release, other than statements of historical facts, that address acquisition of the Property and future work thereon, mineral resource and reserve potential, exploration activities and events or developments that the Company expects is forward-looking information. Although the Company believes the expectations expressed in such statements are based on reasonable assumptions, such statements are not guarantees of future performance and actual results or developments may differ materially from those in the statements. There are certain factors that could cause actual results to differ materially from those in the forward-looking information. These include the results of the Company’s due diligence investigations, market prices, exploration successes, continued availability of capital financing, and general economic, market or business conditions, and those additionally described in the Company’s filings with the Canadian securities authorities.

Investors are cautioned that any such statements are not guarantees of future performance and actual results or developments may differ materially from those projected in the forward-looking information. For more information on the Company, investors are encouraged to review the Company’s public filings at www.sedar.com. The Company disclaims any intention or obligation to update or revise any forward- looking information, whether as a result of new information, future events or otherwise, other than as required by law.