January 24, 2023 - TheNewswire - Renforth Resources Inc. (CSE:RFR) (OTC:RFHRF) (FSE:9RR) (“Renforth” or the “Company”) would like to offer shareholders an update on the status of exploration at Surimeau for pegmatites, lithium and rare-earth elements.

Due to our focus on the more advanced, by both Renforth and historically, ~20km Victoria mineralized battery metals horizon and the ~9km of the longer Lalonde horizon we have looked at to date, we have allocated only a small amount of our resources to the lithium/rare earths effort.

"Renforth has hardly looked at lithium at Surimeau, mainly because our battery metals systems, mineralized starting at surface, are the obvious, and the easiest, thing to "explore" and create value for shareholders.  However, we do have pegmatites and they deserve to be properly considered, separately from Victoria and Lalonde, for not only lithium potential but also rare earth elements potential. So, we have begun that process in advance of the summer fieldwork season" states Nicole Brewster, President and CEO of Renforth.

In 2022 Renforth only devoted a handful of field days to prospecting for lithium in a limited area, this work was focused only on the pegmatites mapped by Metals Tech Lithium and noted in the SIGEOM database in the SW portion of the property. In addition to sampling pegmatites Renforth has concluded, through sampling, that the Decelles Batholith, which forms the southern portion of Surimeau, is a fertile batholith, which can have an area of influence of up to 10km, a good portion of Surimeau to the north of the batholith. As a result, Renforth considers most of the property prospective for pegmatites, pegmatites have been noted as far north as Victoria and Lalonde.

Only the area west of the Rapid 7 road and south of the Victoria mineralization was prospected, with accessible pegmatites and granites (issues with snow, water, and lack of trails) visited and sampled. Sampling resulted in elevated lithium, caesium, rubidium, and tantalum at various locations, generally within the sediments near to or in contact with pegmatites. This could be interpreted as either a "halo" effect due to the mobility of various elements, or indicative of the presence of an unseen lithium bearing pegmatite. All of the documented pegmatites were visited and sampled, though this work covers only a small percentage of the prospective ground, "new" pegmatites were also found and sampled. All samples taken were grab samples, there was limited assaying for rare earth elements performed, Renforth has since concluded that any future work with respect to lithium should include this. Assay values returned range for each element as follows, for lithium background up to 800ppm (a re-assay of a sample which originally assayed 410 ppm), for caesium from background up to 169ppm, rubidium from background up to 1170ppm and tantalum from background up to 149.5ppm. Not only are grab samples, by their nature, not reflective of the whole, Renforth is confident that the exploration work we did do is not comprehensive, it was only designed as initial prospecting. Summer 2022 ended up being focused on the surface battery metals (Ni, Co, Cu, Zn and Mo) mineralization found, then channeled, stripped, and channeled again at Lalonde, finally drilled in December 2022, with no follow up on the early-stage lithium prospecting.

Pegmatites will be the focus of prospecting for Summer 2023, this will include searching for more "new" pegmatites, along with mapping and sampling of known pegmatites and the sediments in proximity. Currently, Renforth has commissioned a lithium targeting report to be generated by spectral analysis of available satellite data, this can be done during winter conditions. In addition, we are consulting with experts in exploration techniques for lithium and rare earth pegmatites in order to develop a comprehensive exploration plan for Surimeau using best practices and the latest knowledge available. 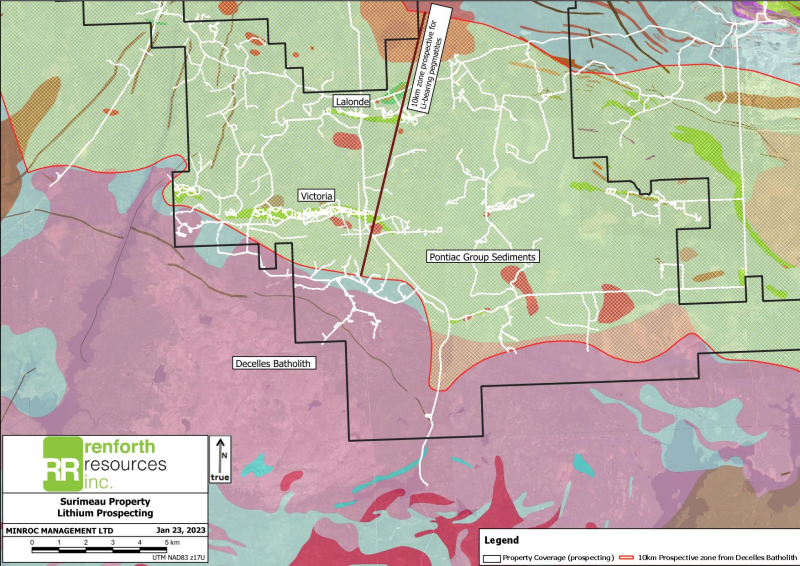 
The map above shows the Decelles Batholith, which forms the southern portion of the map, with the Pontiac sediments to the north, as well as a 10km prospective zone north of the batholith where there is potential for Li-bearing pegmatite dykes, this zone covers most of the property. Prospecting tracks to date (both battery metals and lithium) are shown as white lines, showing property coverage.

Renforth is now receiving, in no particular order, assay results from the December 2022 drill program at Lalonde and Victoria.  Results will be publicly released once complete.  Renforth has submitted permit applications for Surimeau, specifically for the very western end of the Victoria horizon. Upon receipt of permits drilling will be announced.

Technical disclosure in this press release has been reviewed and approved by Francis R. Newton OGQ a “qualified person” pursuant to NI 43-101.

Renforth also holds the Nixon-Bartleman property, west of Timmins Ontario, with gold present on surface over a strike length of ~500m.