December 1, 2021 – TheNewswire - Vancouver, Canada - Guyana Goldstrike Inc. (the “Company” or “Guyana Goldstrike”) (TSXV:GYA) (OTC:GYNAF) is pleased to announce it has partnered with Windfall Geotek Inc. (TSX-V: WIN, OTCQB: WINKF, FSE: L7C2) a leader in the use of Artificial Intelligence (AI) with advanced knowledge-extraction techniques since 2005 in the mining sector to provide its Artificial Intelligence Targeting Technology for the East Georgie Polymetallic Project (“East Georgie” or the “Property”) located in the prolific Golden Triangle region of British Columbia.

Peter Berdusco, Chief Executive Officer of Guyana Goldstrike, commented: “Windfall Geotek’s AI technology has a 15-year track record of success and will be a significant exploration tool increasing our chance of early discovery while cutting time & costs. We are excited to work with Windfall Geotek on our East Georgie Project in British Columbia’s Golden Triangle.”

Simran Kamboj, President of Windfall Geotek commented: “We’re excited to work with Guyana Goldstrike to assist them in building a more effective exploration program using our industry leading data and AI technologies. Multi year deals like this allow Windfall Geotek to join in on the journey with our customers and use new data from exploration as it becomes available to continuously refine the target zones.” 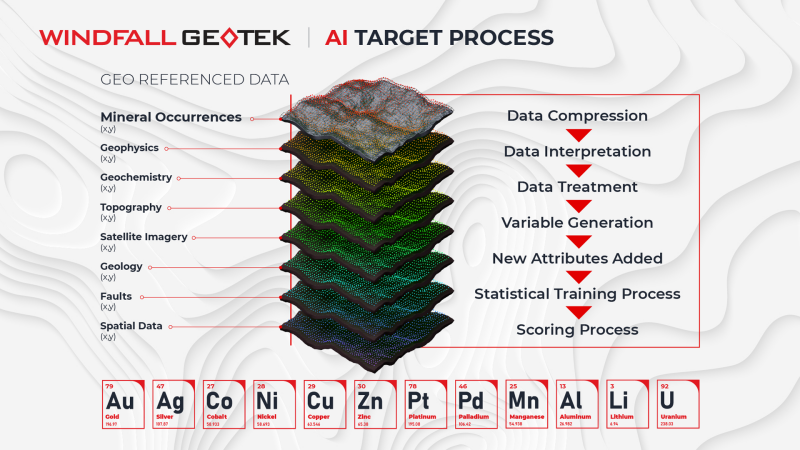 For further information regarding the East Georgie Project, readers are encouraged to review the Company’s news release of July 26, 2021.  Acquisition of the option to acquire the East Georgie Project remains subject to a number of conditions, including the completion of any necessary financing, the completion of a technical report, the approval of the TSX Venture Exchange and the satisfaction of other closing conditions customary in transactions of this nature.

Guyana Goldstrike is a mineral exploration company engaged in the exploration of precious metal and base metal projects in North America. The company recently signed a definitive agreement to acquire a 100% purchase option on the East Georgie Polymetallic Project in the Golden Triangle, British Columbia. The project consists of 69 active mineral claims totalling 10,840 hectares (ha). It lies within an area extending north and northwest from a southern apex at the old mining camp of Anyox which hosts more than 1,000 mineral occurrences of dominantly precious metal vein type, with related skarn, porphyry and massive sulphide

About Windfall Geotek – Powered by Artificial Intelligence (AI) since 2005

Windfall is an Artificial Intelligence company that has been in business for over 15 years developing its proprietary CARDS analysis (AI) and data mining techniques. Windfall Geotek can count on a multidisciplinary team that includes professionals in geophysics, geology, Artificial Intelligence, and mathematics. It combines available public and private datasets including geophysical, drill hole and surface data. The algorithms designed and employed by Windfall are calculated to highlight areas of interest that have the potential to be geologically similar to other gold deposits and mineralization. The Company's objective is to develop a new royalty stream by significantly enhancing and participating in the exploration success rate of mining and to continue the Land Mine detection application as a high priority. Windfall has played a part in numerous past discoveries utilizing its methodology as described at: https://windfallgeotek.com/.

Christopher (Kit) Campbell, P. Geo., is a Qualified Person in accordance with National Instrument 43-101 – Standards of Disclosure for Mineral Projects.  Mr. Campbell has reviewed and approved the scientific and technical content of this news release.

On behalf of the Board of Directors of

This news release may contain certain “Forward-Looking Statements” within the meaning of the United States Private Securities Litigation Reform Act of 1995 and applicable Canadian securities laws.  When used in this news release, the words “anticipate”, “believe”, “estimate”, “expect”, “target, “plan”, “forecast”, “may”, “schedule” and other similar words or expressions identify forward-looking statements or information.  These forward-looking statements or information may relate to future prices of commodities, accuracy of mineral or resource exploration activity, reserves or resources, regulatory or government requirements or approvals, the reliability of third-party information, continued access to mineral properties or infrastructure, fluctuations in the market for gold, and other factors or information.  Such statements represent the Company’s current views with respect to future events and are necessarily based upon a number of assumptions and estimates that, while considered reasonable by the Company, are inherently subject to significant business, economic, competitive, political and social risks, contingencies and uncertainties.  Many factors, both known and unknown, could cause results, performance, or achievements to be materially different from the results, performance or achievements that are or may be expressed or implied by such forward-looking statements.  The Company does not intend, and does not assume any obligation, to update these forward-looking statements or information to reflect changes in assumptions or changes in circumstances or any other events affections such statements and information other than as required by applicable laws, rules and regulations.