Vancouver, British Columbia - TheNewswire - January 13, 2021 - Au Gold Corp (TSXV:AUGC) (“AUGC” or the “Company”) is pleased to announce the submission of a series of comprehensive channel and chip samples collected from the Tomahawk Zone in late October, 2020 to ALS Global – Geochemistry Analytical Lab in North Vancouver B.C.  This work formed part of the recommendations presented in the Company’s recently filed October 6, 2020 NI 43-101 compliant “Technical Report on the Ponderosa Property”.

The Tomahawk Zone is the most advanced and highest priority showing on the Property.  The area was identified through historical prospecting as a quartz rubble pile roughly 3 m in diameter.  Six historical grab samples reportedly returned from below detection to 0.54 g/t gold but no additional follow-up work was conducted.  In 2019 the Company expanded the target scope by prospecting an additional six grab samples of epithermal quartz material further afield that returned values ranging from below detection limits to 2.96 g/t gold.  Subsequent hand trenching identified in-situ epithermal style mineralization and alteration along a 55 m strike length and 15 m across the widest continuous exposure.  The vein zone remains open along strike and the footwall contact has not yet been delineated.

The Tomahawk vein zone strikes north-northeast and dips moderately westward between 45 and 70 degrees.  Interpreted dips suggest true widths are between 70 and 90 percent of the reported surface exposures.  These orientations coincide with a number of other showings on the property that remain under explored.

Both channel and chip sampling methods were utilized among the four trenches sampled.  Channel sampling was completed using a rock saw to cut two parallel lines approximately 5 cm apart to a depth of 8 to 10 cm along the bedrock exposure while a number of highly friable sections were chip sampled by conventional means.  One meter sample intervals were measured horizontally along the length of the exposures and stations were marked with interval and sample number on double sided aluminium tags.  Material was extracted from sawn channels with the use of a wedge and mallet.  Select vein and alteration material was photographed from each sample site before being placed in double poly bags, labeled and zap strapped.

“We are very pleased to have completed this late season sampling program which will help guide our future drill planning of this target” stated President and CEO, Marc Blythe.  “Given the interpreted high-level exposure represented at Tomahawk, lower gold grades are generally expected from this part of the system and we would be encouraged by sub-gram gold assays over several meters.  The Company plans to continue advanced exploration of the Tomahawk Zone in 2021.”

Assay results will be released as they are received and interpreted.

The road accessible Ponderosa Gold Property is located 16 km southwest of Merritt, BC, within the Spences Bridge Gold Belt which forms a northwest trending belt roughly 180 km long and up to 24 km wide.

Rocks of immediate interest in the belt and underlying much of the Property comprise successions of Cretaceous subaerial and pyroclastic volcanic flows which host significant gold mineralization at Westhaven Gold Corp.’s Shovelnose project approximately 20 km southeast of the Ponderosa Gold Property.  Geology across the Ponderosa Gold Property is broadly divided into two Cretaceous age volcanic sequences comprising subaerial and pyroclastic volcanic flows of the Pimainus and Spius Formations.

Historical exploration at Ponderosa focused almost exclusively on an in-situ occurrence referred to as “Axel Ridge”, which is characterized by outcropping cryptocrystalline/saccharoidal to crustiform and colloform banded epithermal quartz. A series of trenches excavated across these outcropping exposures reported highlights including 2.22 g/t gold over 11.7 m, 1.92 g/t gold over 14.0 m (with 3.03 g/t gold over 8.0 m) and 3.6 g/t gold over 7.0 m.  It should be noted the true widths of the reported intervals are estimated to be 3 m or less given the unusual shallow dips at this locale.  Follow-up diamond drilling of seven holes at Axel Ridge was unsuccessful in intersecting the surface mineralization at depth.  AUGC is not planning any exploration at Axel Ridge at this time.

Work conducted in 2019 and 2020 significantly upgraded three historic showings and identified an entirely new showing. These showings in order of priority are referred to as the Tomahawk, Flat Iron, T-Bone and Rib Eye zones. The Tomahawk Zone is the most advanced and highest priority showing on the Property.

The Ponderosa Gold Property is located within the unceded traditional territory of the Nlaka’pamux People.

Further information on the Property can be found on the Company’s website: https://www.augoldcorp.com/ponderosa-property/.

All scientific and technical information in this press release has been prepared by Marc G. Blythe, P. Eng., a qualified person as defined by NI 43-101.  Mr. Blythe is the President and CEO of Au Gold Corp. 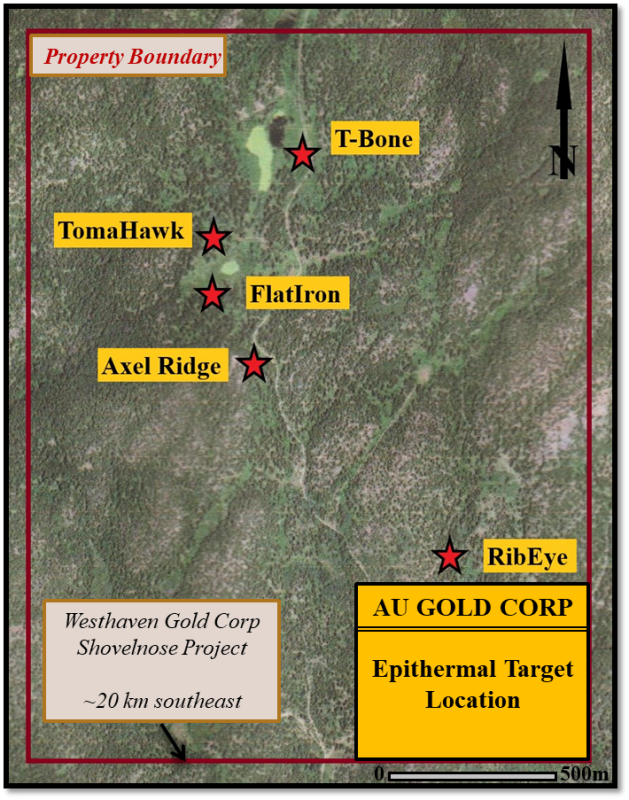