With this press release Renforth is disclosing additional positive drilling results for Parbec, specifically the results for PAR-21-128, PAR-21-129 and restating the results for PAR-21-133. The restatement occurs due to an internal key punch error related to batch numbers. Each of these drill holes is summarized below with assay results following. Management expects that these results will have a positive impact on the upcoming resource restatement for Parbec, scheduled to take place subsequent to the receipt of all the outstanding assay data.  After consideration of today’s drill results there are still 16 drill holes to be received and reported on from the 15,569m drill program at Parbec.

This hole was drilled as a downdip extension hole within the “Camp Zone” portion of the Parbec deposit, successfully extending mineralization seen in PAR-17-67, which assayed 26.5m at a grade of 0.64 g/t gold, downdip by approximately 80m vertically.  In PAR-21-128 the downdip extension is expressed in two intervals, namely 12.6m of 4.39 g/t gold and 6m of 1.19 g/t gold, with incidental gold values between the two, which would allow interval continuity but result in a lower grade. The PAR-21-128 interval impacts the model positively as when modelling the mineralization can be extended between the two holes. 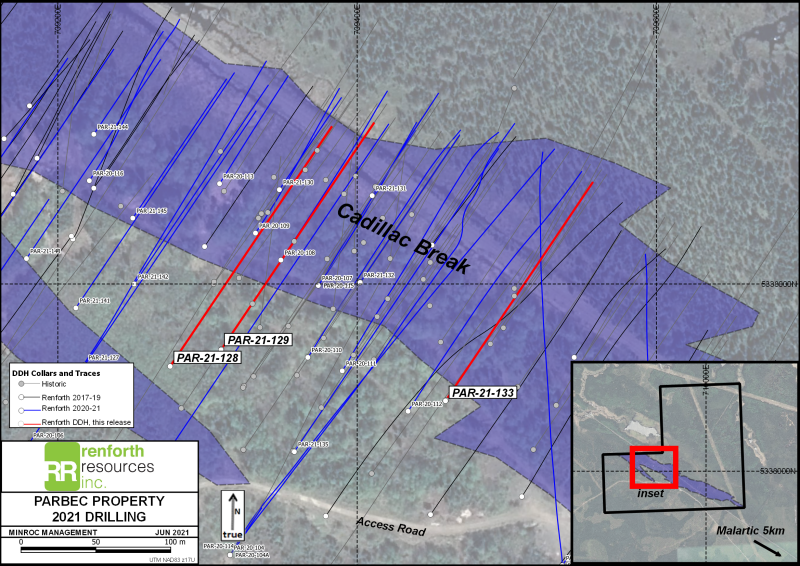 The Top Ten Intervals from the 2020/21 drill program at Parbec is updated to the following, available on our website along with a recap of all of the highlight drill results released to date for this program.

*assay intervals are presented as measured in core box, not true widths

At the end of shift on June 15th the drill program had completed 87m of drilling after a day and a half.  It is anticipated that each hole drilled will go to either a length of 300m, or until the sedimentary contact in the north is reached, whichever is first.

The program is planned for ~1000m, which is likely to be 4 holes, drilled from the previously used drill pads located within the magnetic anomaly at Victoria West (the southern collar in each pair of holes), with the hole drilled to the north in order to attempt to obtain depth extension of the mineralization seen in the Spring 2021 drilling.

On a traverse from an ATV trail north towards the SUR-21-05 pad, the second hole drilled in the March-April DDH program, a surface exposure of a calc-silicate unit identified in drill core in multiple holes in the March-April drill program was discovered. It is very distinct as it strongly resembles quartzite. The rock is strongly weathered at surface but fresh pieces contain the same style of mineralization as seen in drill core; fine to coarse stringers of sulfide (pyrite+sphalerite) alongside bright green cr-diopside crystals. This exposure is located about 65m due south of the SUR-21-05 collar. In the hole this unit was seen from 85-97m (approx.). Identifying this unit at surface demonstrates both that there is a north-dip to the units and that this mineralized unit is continuous from surface with open-depth potential. If surface sample assay results are positive, this would be a trenching/stripping target.

A very large quartz vein hosted by cordierite-bearing metasediments with fine pyrite along the vein walls was discovered approximately 140m due South of SUR-21-05. This outcrop appears to be part of an old trench as it was obviously stripped, although quite some time ago. The vein itself is approximately 5m wide x 20m long and makes up a small hill, less than meter high. The area surrounding the vein was prospected but no other surface exposures were located, and this vein at surface is beyond any drilling. Samples taken of the vein and host rock will be assayed for gold and, if results are positive, this would be a very strong trenching/stripping target as it is easily accessible and relatively easy to get to.

Approximately 1.8km east of the main Lalonde showing is a ridge in a relatively recent logged area, exposing sulphide (Pyrite-Pyrrhotite) bearing graphitic sediments in contact with orange coloured mica bearing, hydrothermally altered sediments. Strongly oxidized ultramafics were found at the southern contact of these sediments. Traces of fine pyrite and pyrrhotite are present in the graphitic sediments as well as in the ultramafics. This rock is visually very similar to the main Lalonde showing as well as the weathered and oxidized outcrops seen along the main road on Surimeau. This appears to be quite a significant strike extension of the mineralization present on Lalonde.  Access is easy, if results warrant it small scale stripping could be carried out.

Renforth is pleased to advise shareholders that the drill permit for Malartic West has been received, valid until March 31, 2022. Renforth does intend to carry out the planned drill program when it can be scheduled.

Samples referred to in this press release were selected, split, bagged and tagged in the field and delivers to the facilities of AGAT Laboratories in Val d’Or Quebec where they were assayed for gold using “202-051 – Au by Fire Assay, AAS Finish” and “202-064 – Au by Fire Assay, Gravimetric Finish” for overlimit (>10 g/t Au) values.

Technical disclosure in this press release has been reviewed and approved by Francis R. Newton P.Geo (OGQ#2129), a “qualified person” pursuant to NI 43-101

Renforth holds the Parbec open pit constrained gold deposit in Malartic Quebec, contiguous to the Canadian Malartic mine, with a 2020 resource estimate of 104,000 indicated ounces of gold at a grade of 1.78 g/t Au and 177,000 inferred ounces of gold at a grade of 1.78 g/t Au. This resource estimate is now considered by Renforth to be out of date due to the results received in a 15,569m drill program which has been recently completed. This program was planned to twin, infill and undercut existing drill holes at Parbec, to support a rebuild of the geological model and a resource estimate restatement. In addition to this Renforth has discovered a nickel bearing ultramafic, coincident with a copper/zinc VMS, over ~5km of strike in the western end of the 20km central anomaly at Renforth’s wholly owned 215 km2 Surimeau property. This prospect was discovered on surface and the subject of a very short, shallow drill program, a more robust drill program is planned for Spring 2021. Renforth also holds the Malartic West property, the site of a copper/silver discovery, and Nixon-Bartleman, west of Timmins Ontario, with gold present on surface over a strike length of ~500m.  Renforth is well funded, with ~$5 million in cash and securities on hand (*as at 05/14/21), in addition to the gold contained in our gold deposit.