September 15th, 2021 – TheNewswire - Vancouver, British Columbia – Arctic Star Exploration Corp. (“Arctic Star” or the “Company”) (TSXV:ADD) (Frankfurt:82A2) (WKN:A2DFY5) (OTC:ASDZF) is pleased to announce that it has received the second round of caustic fusion diamond results from the Sequoia Kimberlite complex. The results are from the remaining half of the drill core recovered from drill holes DG 2021 04 and DG 2021 05 drilled 202m apart in the central and northern parts of the Sequoia Kimberlite complex. The results are given in Table 1. The entire core has now been fused, totaling 505 kg. Usually, half the core is kept for reference, but due to the encouraging results from the diamond assays in the first half of the core and the encouraging indicator mineral results reported in the news release dated 7th September, the decision was made to fuse the entire core.

The samples were taken at the same intervals as the first and they confirm that the different rock types have different diamond counts. The indicator minerals also demonstrate that the two main rock types, the volcanoclastic kimberlite and coherent kimberlite are different. While both have indicators equivalent to those found in the population of large diamonds found around the world, and diamond inclusion chromite,

only the coherent kimberlite has significant “G10” and eclogitic garnets with diamond inclusion chemistry.

The Sequoia caustic fusion results were processed through SRC laboratories of Saskatoon, NQ core was hand split and bagged in approximately 8kg samples to fit geological intervals where possible, the first half of core was sent and processed, then the second half of the core was sent using the same sample intervals. Both samples were sent by chain of custody, SRC is an independent lab and an ISO …….

Samples are placed in a kiln, heated to 5080C with caustic soda for 24 hours. The residue is hot poured through a 0.075mm sieve. The residue is then further chemically treated if required until just the refractory minerals remain including diamonds. The residue is sized by sieving and then the diamonds are selected by a mineralogist. Larger diamonds (>0.5mm) are described and weighed. 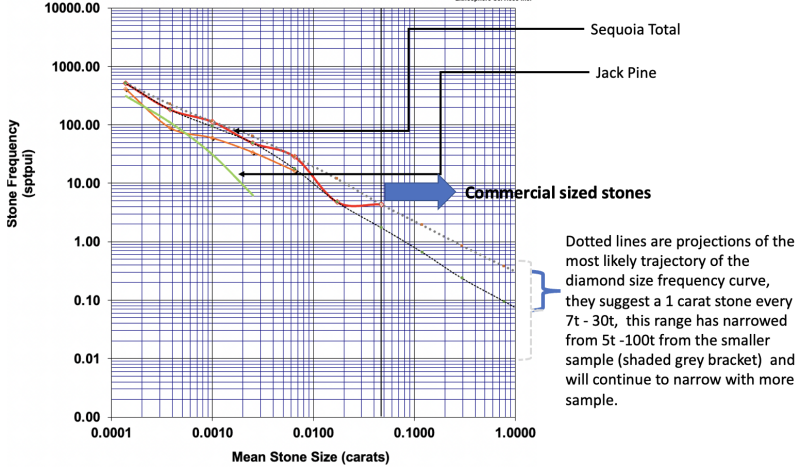 Mr. Buddy Doyle commented, “These results demonstrate how “noisy” diamond results can be, with higher diamond counts and larger diamonds showing up when we fused the second half of the core! This is not unusual, it’s all down to collecting enough sample. The current results suggest that a kimberlite sample of approximately 5t, ten times the sample we have to date, would produce a smooth diamond size frequency curve from which a first  (global) grade estimate could be made. Such a sample should provide further guidance to the probability of really large stones. Drilling using HQ sized core at 100m spacing within the Sequoia kimberlite complex planned for Spring 2022 will be able to achieve this. Results to date are encouraging, considering the small sample size, and suggest grades that will fall within the range of kimberlites being mined in the Lac de Gras field, (where pipes with grades of 0.3 c/t to 4.2c/t are being mined or are in mine plans), with a possible added bonus of higher propensity of larger stones as suggested by indicator data. The Sequoia complex is large and the extra drilling will also help define tonnage. More work will tell.”

The Qualified Person for this news release is Buddy Doyle, AUSIMM, a Geologist with over 35 years of experience in diamond exploration, discovery, and evaluation. Mr. Doyle led the team that discovered the kimberlites being mined at Diavik and 100 other kimberlites in the Lac de Gras field. He also received the Hugo Dummitt award for excellence in diamond exploration in 2005.

ON BEHALF OF THE BOARD OF DIRECTORS OF ARCTIC STAR EXPLORATION CORP.

This news release contains “forward-looking statements” including but not limited to statements with respect to Arctic Star’s plans, the estimation of a mineral resource and the success of exploration activities. In this release it is not certain if the kimberlite discovered will be economic or not as this depends on many factors. Forward-looking statements, while based on management’s best estimates and assumptions, are subject to risks and uncertainties that may cause actual results to be materially different from those expressed or implied by such forward-looking statements. There can be no assurance that such statements will prove to be accurate, as actual results and future events could differ materially from those anticipated in such statements. Factors that could affect our plans include our potential inability to raise funds as intended, and in such event we may require all funds raised, if any, to be used for working capital rather than the intended uses as outlined. Accordingly, readers should not place undue reliance on forward‐looking statements. Arctic Star undertakes no obligation or responsibility to update forward‐looking statements, except as required by law.