Vancouver, BC - TheNewswire - May 21st, 2020 - Mountain Boy Minerals Ltd ("Mountain Boy" or the "Company") (TSXV:MTB) (Frankfurt:M9UA) is pleased to provide a summary of its completed geological model for the American Creek West Project.

Recent lead isotope analytical results provide additional support for an emerging geological model of Mountain Boys' American Creek West Project (ACW). The model points to district-scale silver-gold potential. The 26 square kilometer (2,600 ha) property, located 22 kms north of Stewart, has a rich mining history: There are 17 recorded past producers on or within 6 km of the property. The region has been explored by several companies, many focused on the historic occurrences. The ACW project is readily accessible by gravel roads off Highway 37A.

By consolidating the properties and assembling a large historical geological database from numerous sources, Mountain Boy is taking the first ever comprehensive view of this richly-mineralized region. The emerging geological model holds that the various mineralized occurrences are surface expressions of a large geological system. That system is analogous to the Premier District, located immediately west of the American Creek property.

We now have compelling evidence that American Creek hosts a distinct geological system similar to Premier in age, geological setting and scale. That model suggests that the many mineralized occurrences are related and that the possibility exists for a larger mineralized body beneath the surface.

Planning and budgeting are now wrapping up for the first phase of the field season which will fine tune the model and define drill targets in anticipation of a second phase. Further details will be announced shortly. 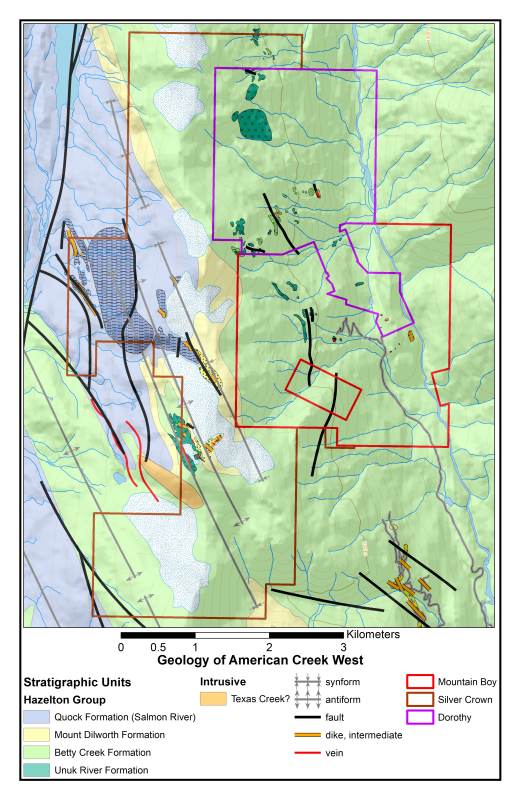 - The first style is related to oceanic arc subduction in the Early Jurassic resulting in porphyry intrusive activity and volcanism. Hydrothermal activity generated by this magmatic activity has resulted in porphyry mineralization and multiple pulses of epithermal, structurally controlled and replacement mineralization telescoping off the porphyry system.

- The second style is related to continental arc subduction during the Cretaceous and consists of structurally controlled mineralization associated with the emplacement of Middle Eocene dyke swarms and stocks of the Coast Plutonic Complex.

Samples taken from the historic Mountain Boy mine area, which consisted of high-grade silver mineralization, were studied in a thesis at the University of Calgary (Kruchkowski, 2000). Kruchkowski found that these samples are characterized by an ore mineralogy suite that in part defines intermediate epithermal deposits (Sillitoe and Hedenquist, 2003). Ore minerals, such as acanthite, Ag-sulfosalts, low Fe sphalerite, galena, tetrahedrite-tennantite and chalcopyrite were identified in the field; the correlating assays to these samples exemplify the poly-metallic nature of the prospect. 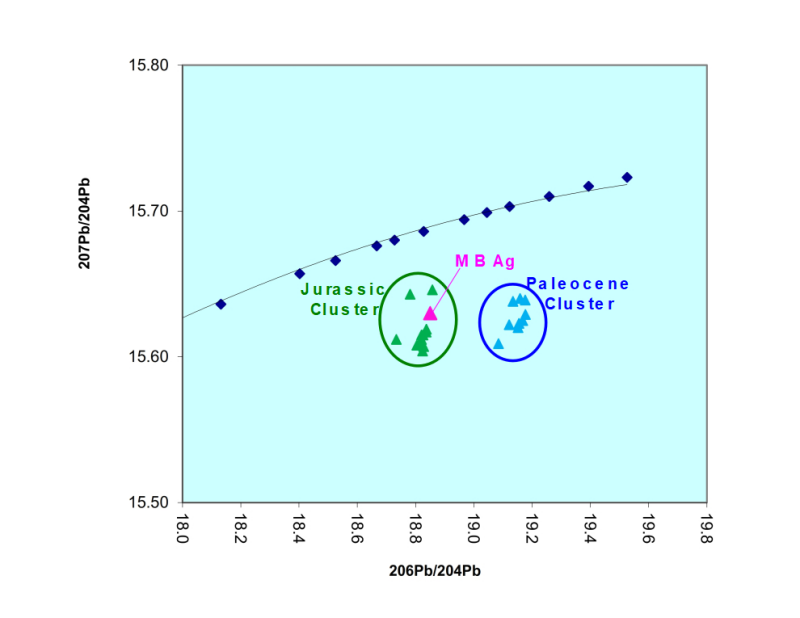 U-Pb isotopic analysis of zircons from a sample of the American Creek intrusion, using laser ablation, yielded a middle Pliensbachian age (ca. 185.4+-0.88 Ma; Figure 4). Petrographic analysis of the intrusion characterizes the sample as a porphyritic latite with sericite-chlorite-calcite-muscovite alteration, cross cut by veins of quartz-chlorite-calcite and sericite veinlets (Figure 4). 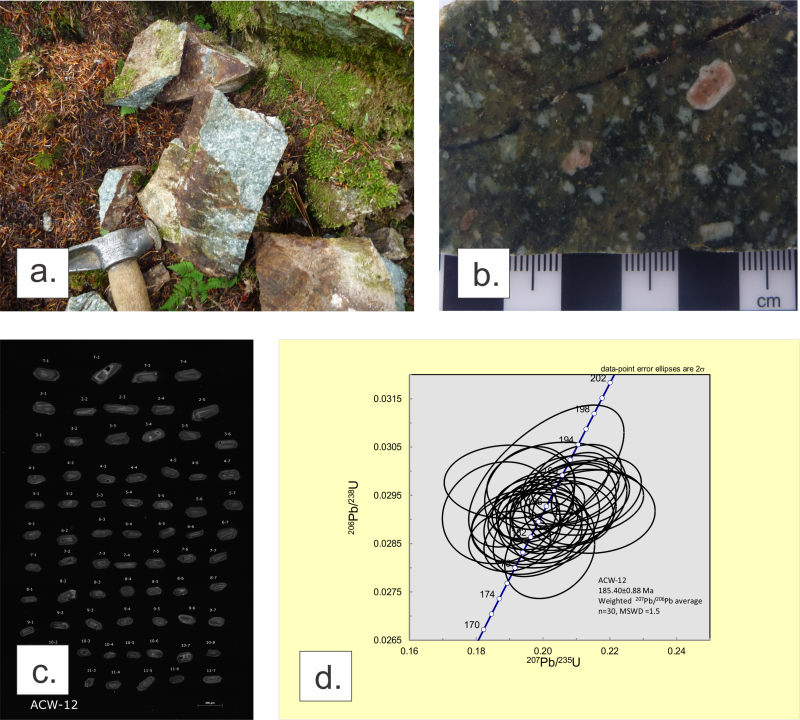 The new discovery area that hosts the second style of mineralization is located west of the Mountain Boy mine. It was covered by glaciers during the early years of exploration along American Creek and has not seen recorded work in modern times. This style of mineralization consists of layered, locally sheeted, quartz-carbonate-sulphide veins. Sulfides are sparse to abundant and appear as coarse grains, fine disseminations, massive to semi-massive veining, and stringers. Samples are described as having galena, sphalerite and pyrite mineralization associated with quartz +- calcite veining. At this time, this style of mineralization is hypothesized to be related to a Paleocene dyke swarm. This age of mineralization is well documented in the region. Galena from this new zone will be further analysed to test this concept.

The geological setting, style of mineralization, nature of the intrusive body and the scale of the system has many similarities to the Premier District, located immediately to the west. The Premier District produced 2.5 million ounces of gold and 50 million ounces of silver from 1918 to 1996. Ascot Resources Ltd recently completed a feasibility study for a restart plan for the Premier Mine. (Ascot News Release, April 15, 2020).

In summary, there is significant opportunity for one or more major discoveries on Mountain Boy's American Creek project. Epithermal vein deposits like this generally have many mineralized ore shoots along multiple structures. While numerous veins have been identified at surface, the work now underway is the first comprehensive look at the region. The work so far has provided compelling evidence that the veins continue to depth, as they do in similar settings, such as the Premier District.

The technical disclosure in this release has been read and approved by Andrew Wilkins, B.Sc., P.Geo., a qualified person as defined in National Instrument 43-101.

On behalf of the Board of Directors: