Vancouver, BC, Canada – TheNewswire - Sept 3, 2021 - Nickel Rock Resources Inc. (the “Company” and “Nickel Rock”) (TSXV:NICL) (OTC:NICKLF) (FSE:NMK2) is pleased to announce that the second phase of the its initial exploration program has been completed on its Nickel exploration claims located in northern British Columbia, Canada. The BC Nickel Exploration Project (the “Project”) consists of four non-contiguous mineral claims groups held by Nickel Rock Resources Inc. through three separate agreements. The exploration stage project is in the Trembleur Lake area of central British Columbia, partially adjacent to FPX Nickel Corp.’s Decar Nickel Project, which is an advanced project targeting awaruite, a nickel-iron alloy mineral, hosted by serpentinized ultramafic intrusive rocks of the Trembleur Ultramafic Unit.  As reported on July 8, 2021, Nickel Rock has optioned out an 80% interest on two of its four mineral claims within the group, the Hard Nickel 4 and Nickel 100 exploration claims, to Surge Battery Metals (TSXV: NILI) in order to concentrate on its exploration  efforts on the Nickel Group Claims directly adjacent to the FPX Nickel Corp. (TSXV: FPX) Baptiste Nickel Deposit.

Robert Setter, Company President and CEO comments “We are very pleased with the results from our initial exploration program on the Hard Nickel and Nickel 100 claim group and specifically with the work completed during phase 2 of this initial exploration program.   So far, we have recorded some relatively high Ni readings measured via portable XRF on the Nickel S block, as mentioned in our news from June 28, 2021, and our geological team suspects these ultramafic rocks have potential to host awaruite mineralization.  This second phase of exploration includes both soil and rock sampling, technical report writing, mapping and assay work, with the remaining work to be done on trenching, geological, geochemical and geophysical surveying.  Completion of this remaining work will fulfil our flow-through exploration work program commitments for 2021.” 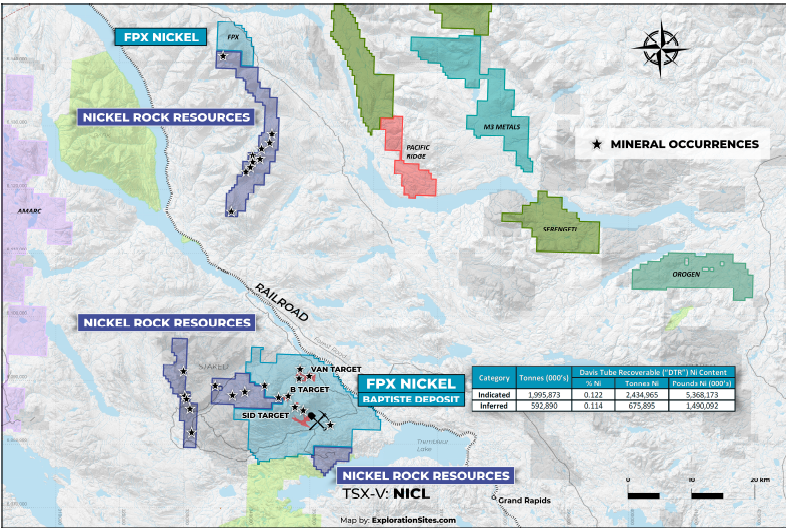 The Company currently has sufficient funds in its treasury to fully fund its 2021 proposed work program and its remaining working capital needs for 2021 and 2022.

The proposed work program consists of trenching, surface exploration, diamond drilling, camp construction, and exploration activities to support drilling and trenching such as soil sampling, rock sampling, prospecting, and geological mapping. The company proposes a 12-man camp to be built in a cirque on the north slope of the un-named mountain west of and adjacent to Mount Sydney Williams, and will be built next to a sub-alpine lake at the headwaters of Van Decar Creek. The location of camp was selected based on past exploration camps at this location and is suitable for supporting exploration. Camp will be used to accommodate field personnel and will be accessed with helicopter.  The work program is managed by Jeremy Hansen, P. Geol. and Hardline Exploration Corp.

The Company estimates that this 2021 work program will include $600,000 in exploration expenditures.

Jeremy Hanson, P.Geo., a qualified person as defined by NI 43 – 101, is responsible for the technical information contained in this release. Readers are cautioned that the information in this press release regarding the property of FPX Nickel Corp is not necessarily indicative of the mineralization on the property of interest.

Clayton Valley is a down-dropped closed basin formed by the Miocene age Great Basin extension and is still active due to movement along the Walker Lane structural zone.  As a result, the basin has preserved multiple layers of lithium bearing volcanic ash, resulting from multiple eruptive events over the past 6 million years including eruptions from the 700,000-year-old Long Valley Caldera system and related events.  These ash layers are thought to contribute to the lithium brines extracted by Albemarle and are also likely involved in the formation of the exposed lithium rich clay deposits on the east side of Clayton Valley. https://nickelrockresources.com/clayton-valley-lithium/

including nickel, cobalt, and chromium. Nickel cobalt mineralization has not been well explored, but the presence of awaruite has been documented.

On Behalf of the Board of Directors

Neither the TSX Venture Exchange nor its Regulation Services Provider (as that term is defined in the policies of the TSX Venture Exchange) accepts responsibility for the adequacy or accuracy of this release. This news release may contain forward-looking statements which include, but are not limited to, comments that involve future events and conditions, which are subject to various risks and uncertainties. Except for statements of historical facts, comments that address resource potential, upcoming work programs, geological interpretations, receipt and security of mineral property titles, availability of funds, and others are forward-looking. Forward-looking statements are not guarantees of future performance and actual results may vary materially from those statements. General business conditions are factors that could cause actual results to vary materially from forward-looking statements.