Montréal – TheNewswire - May 12, 2021 – St-Georges Eco-Mining Corp. (CSE:SX) (OTC:SXOOF) (FSE:85G1) (CNSX:SX.CN), an up-and-coming leader in green energy metals exploration, green technologies, and battery recycling, would like to update its shareholders and stakeholders on the initial phases of drilling planned on its Julie Nickel & Energy Metals project on the Québec North Shore.

The Company has completed the surface geophysics campaign initiated in February.  A contracted independent third party has received the preliminary geophysical report. The Company’s geologists and geophysicists expect to be able to file a final report in the coming days.

The initial interpretation of the results coupled with the recent results from bulk sampling from a destructive percussive drilling campaign alongside the reinterpretation of historical work program results has led the Company to almost double the land size of the project.

In November 2018, St-Georges undertook a percussive hammer drilling campaign on the Julie nickel showing and along the northeast extensions.  About six vertical drill holes, 10 to 15 metres long by 10 cm (4 each) hole diameter, were drilled directly on the outcropping nickel-copper mineralization. Each sample consisted of a 1.5m length weighing approximately 25 kg each.  These samples were bagged, identified, and sealed.  The samples were processed at the laboratory of the Magnor Exploration Inc. geoscience contractor of St-Georges. The samples were unpacked and processed by a certified geochemist. The geochemist proceeded to homogenize and separate into several equal samples using a riffle splitter and verify the homogeneity of all samples by multiple measurements of nickel with a handheld XRF Vanta analyzer. Only two samples from hole JU-18-01 (from 0.0 to 1.5m, 0.75kg weight) and from hole JU-18-03 (from 0.0 to 1.5m, 0.87kg weight) with significant nickel content identified by XRF instrument were selected for assay at a certified laboratory. The two composite samples, weighing less than 1 kg, were embedded, sealed, identified, and shipped to the certified ALS laboratory in Val d'Or, Québec. ALS lab treated the samples by fine crushing, splitting, and pulverizing. Finally, the samples were analyzed for precious and base metals by ICP-MS and ICP-AES for high-graded nickel samples. 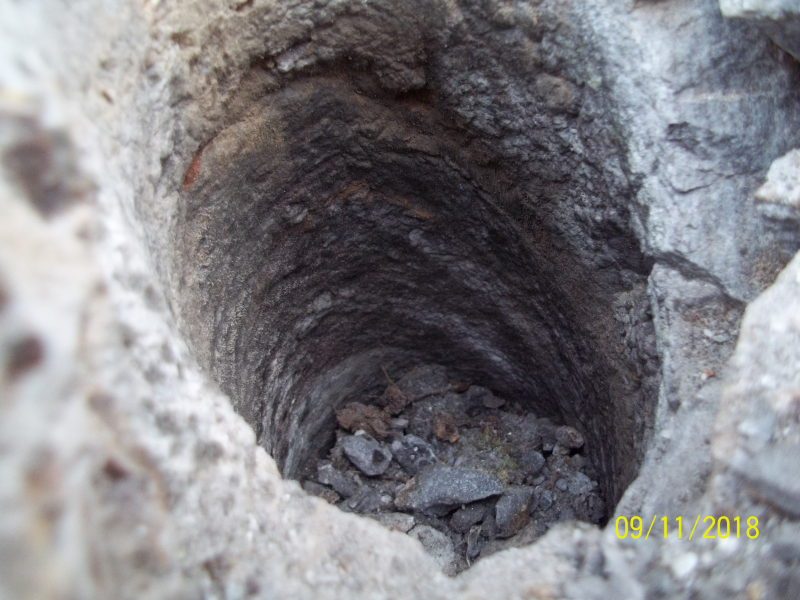 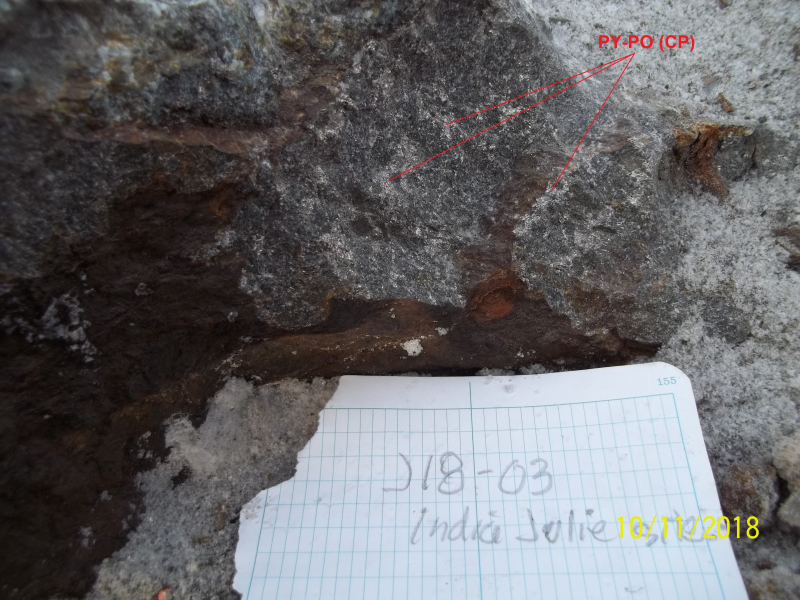 The balance of the material that was not sent to the independent laboratory for assays was delivered to the St-Georges Metallurgy team for bulk processing in support of research & development initiatives.

The Company geologists have planned the following fully financed drilling campaigns on three of the Company’s projects in Québec.

The surface geophysical report is expected this week. The permitting request and budget are being finalized, and the Company expects to file for permitting within a week.  Presentation of the work program to the stakeholders, including the First Nation of Pessamit, who own the Ancestral Rights to the land on which Julie is located, will then be consulted.

At the time of the dissemination of this press release, the drills and drilling equipment have been secured and ready and are ready to be moved on site.  A team from the Company is currently onsite for the planning and logistics of the camp, which has been prefabricated over the last three weeks.  Water and fuel management are also being assessed. 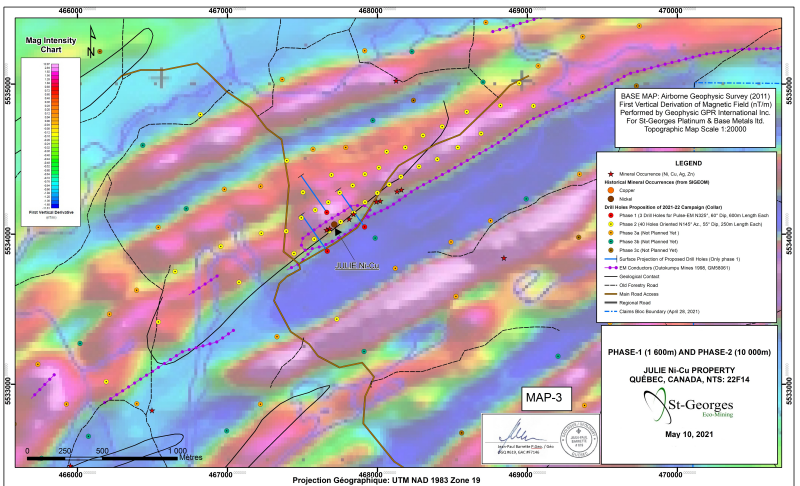 A forward base of operation allowing helicopter and floatplane operation has been established on the north-eastern banks of the Manic V reservoir and is accessible to freight trucks.  The forward base can host the teams that will be in rotation on the projects.  The Company expects to deliver by chopper the floatplane docking structure at Camp Helene on the project.  The material to bring the camp to current COVID norms will be delivered starting this weekend.  The team will initiate field reconnaissance work and bring historical drill cores from the camp core shack to the forward base to be transported to southern Québec.  The Company intends to resample portions of the retrieved cores with special attention given to PGEs that were not formerly assayed historically. Permitting should be filed right after the Julie permitting process is initiated with the Ministry of Natural Resources.

The Company expects to drill two deep holes on the Villebon Project to test the depth of the historical resources contained within the Céré showing.  Permitting will be initiated this week. Drillers, geologists and support staff should be lodged or will commute from the nearby town of Val d’Or.

Jean-Paul Barrette P.Geo, A professional geoscientist (OGQ #619) (GAC #F7146) and an Independent Qualified Person as defined by National Instrument 43-101, has prepared, supervised the preparation or approved the scientific and technical disclosure in the news release.

St-Georges is developing new technologies to solve some of the most common environmental problems in the mining industry. The Company controls all the active mineral tenures in Iceland. It also explores for nickel & PGEs on the Julie Nickel Project and the Manicougan Palladium Project on the Québec’s North Shore. Headquartered in Montreal, St-Georges’ stock is listed on the CSE under the symbol SX, on the US OTC under the Symbol SXOOF and on the Frankfurt Stock Exchange under the symbol 85G1.