Montreal, August 8, 2019 - TheNewswire - St-Georges Eco-Mining Corp. (CNSX:SX.CN) (OTC:SXOOF) (FSE:85G1) is pleased to inform the public that its subsidiary, ZeU Crypto Networks Inc., has filed this week with the US Patent Office a provisional patent application for its Cross-Chain Atomic Swaps & Contract-less Distributed Ledger Applications Interoperability, the augmented engine and structure of ZeU's Internet of Blockchain. The engine is agnostic to any and all blockchain protocols currently on the market or expected in the future.

The Provisional Patent: "A method and system to complete cross-chain transactions"

Moreover, the system can perform a blockchain transaction with a traditional off-chain transaction, such as a database operation or message queue transaction. With this method, the blockchain has the transaction characteristics of the traditional information system plus the attributes of strong consistency and resistance to attacks. This patent also innovatively proposes to set up three trigger conditions for a smart contract, so that the smart contract can not only record the current operation but also can ensure the consistency of cooperation amongst contracts running on different chains. It can make sure all contracts achieve the same final status: all succeed or all fail.

Virtualization of inter-protocol distributed logic will further push the boundaries, as this will enable lightning-fast inter-ledger settlement while ensuring scalability and the ability not to add latency to the underlying networks. Acting as an off-chain middleware, it creates communication channels between 2 or more participating ledgers. The system is made in a way where each participating smart contract or ledger-based application must achieve the same results, which ensure it remains trustless.

Furthermore, the 0-chain engine being essentially a secured asymmetric encryption communication infrastructure between ledgers, will replace the need for ledger-based oracles and will enable DApps (decentralized applications) to be linked together in an unprecedented way removing the need for smart contract logic in most cases. If not, it will enable interoperability between smart contracts and n-amount of blockchain protocols. 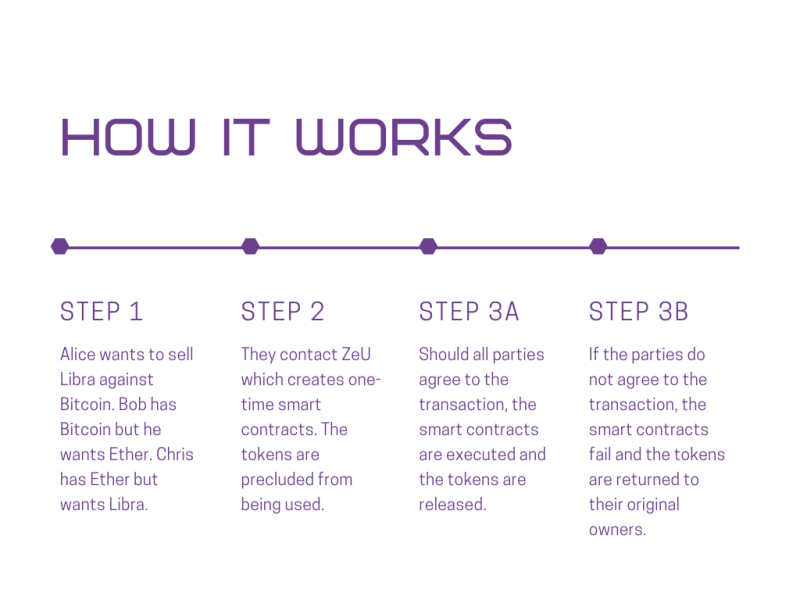 Karen's DApp is fetching important verification data from an Ethereum-based smart contract. She is using complex connectors to be able to reward her user in BSV (Bitcoin Satoshi Vision) and BTC (Bitcoin) when they accomplish specific, verified tasks. Furthermore, she needs complex logic to base her reward on the average BTC last block number and BSV volume.

Without the need for unsecured push notifications, Karen, Bob, and Chris can now install a three-way communication channel between their DApps, which will send messages and trigger the three corresponding ledger events automatically. It can be demonstrated that none of them can tamper with the data as the communication (transaction) would fail.

Alice wants to sell her Libra for Bitcoin. Alice's friend Bob has Bitcoin but wants Ether. Bob's friend Chris has Ether but wants Libra. Chris and Alice don't know each other.

They contact ZeU to create the smart contracts and all parties deposit equivalent amounts of cryptocurrency. ZeU creates the one-time smart contracts which preclude the tokens from being used.

The parties agree to the transaction, the smart contracts are executed, and the tokens are released.

The parties do not agree to the transaction, the smart contracts fail, and the tokens are returned to their original owners. 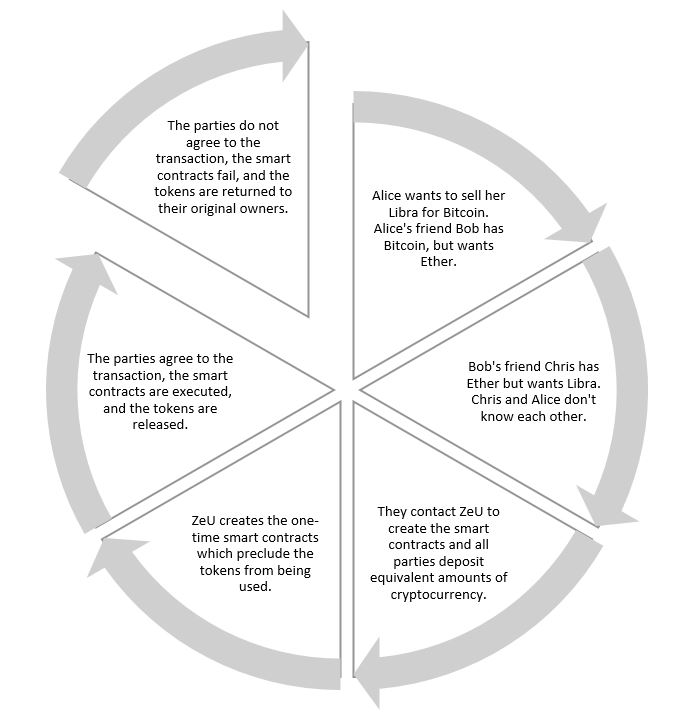 Consequences of this Technology on other ZeU Initiatives

Hillary's plugin, available from MulaMail digital wallet, will create an easy one-click/one-swipe user experience to swap any digital asset for any digital asset. Thus making MulaMail a distributed exchange without the lengthy friction of a traditional exchange.

Furthermore, the exchange will create more digital asset liquidity as it will enable trade between n-participants. Ex: Karen exchanges 0.5 BTC for 20 ETH (Ether). The 20 ETH belongs to Chris, who is trading his ETH for LTC (Litecoin). The LTC will come from Dave who wants BTC. This happens as a seamless experience.

This way, all existing trade orders could be exponential as they can now participate in multilateral trading, which may effectively cripple traditional exchanges.

Frank Dumas, CEO of ZeU Crypto Networks, commented "(...) this is by far the most significant development achieved by the ZeU team. We are proud of having delivered this milestone, which we initially expected to develop over several years. With this, the potential impact for blockchain developers is paramount, not the protocol they endorse. (...) It gives freedom back to developers. They no longer have to be attached to a particular protocol in the development of their distributed ledger applications. I think that it is even more disruptive for the trading of data or digital assets as it eliminates a number of intermediaries. We realize this may make us some enemies. (...)