March 14th, 2018 / TheNewswire / Rockport, Canada – New Age Metals Inc.(NAM) (TSX.V: NAM; OTCQB: PAWEF; FSE: P7J.F) Harry Barr, Chairman & CEO, stated; “We are pleased to update our shareholders and interested parties as to our present exploration program on our River Valley PGM project and our 5 Manitoba Lithium Projects. Both of the company’s mineral divisions have aggressive exploration and development plans for 2018 and the balance of this release will provide you with an update of the specific details.” 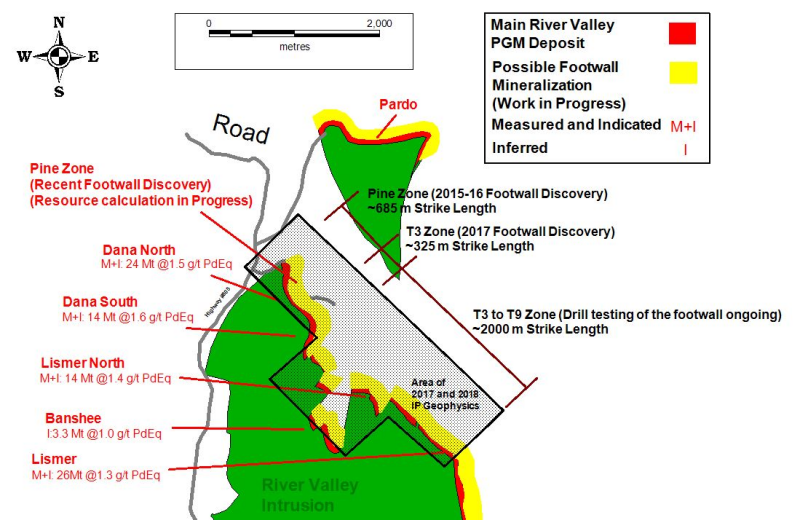 The current geophysical survey on our River Valley PGM Project is a high-resolution OreVision® IP survey performed by Abitibi Geophysics, (Thunder Bay, Ontario), who completed last year’s survey on our new southern discovery, the Pine Zone to T-3 target. New drill discoveries have been made in this region from 2015-2017.  OreVision IP can reveal targets at four times the depth of conventional IP without compromising near-surface resolution. The goal of the geophysical survey is to test the footwall portion to the main River Valley PGM Deposit, southward of the Pine Zone IP survey (News Release: Jun 19th, 2017) and to cover the area between target anomalies T4 to T9 (Figure 1). This area represents a survey strike length of approximately 2000 metres. The geophysics have just completed. The Abitibi Geophysics report is expected by the first week of April and will then be given to Alan King, NAM’s Sudbury geophysical consultant. Mr. King’s mandate will be to reinterpret the Abitibi Geophysics report and add his conclusions to our extensive existing geophysics database. Recommendations for the 2018 drill program will follow.

Upon completion of the present geophysical program, the company will outline a series of drill programs to test the new geophysical anomalies generated from T4 through T9 from the 2018 Abitibi survey and outline additional drilling to the north in Pine Zone and T3 where only Phase 1 Drilling has been completed to date.

To date an approximate 140,659 meters (461,480 feet) in 628 drill holes have been conducted by the company as operator on the River Valley Project. Several independent 43-101 compliant resource estimates have previously been generated for the deposit through the exploration and development phases. The River Valley Deposit’s present resource, with approximately 3.9M PdEq ounces in Measured Plus Indicated mineral resources and near-surface mineralization, covers over 12 kilometers of continuous strike length. The acquisition of the RVE adds an additional 4 kilometers for a total of 16 kilometers of strike. The company continues to explore and enhance the River Valley PGM Deposit. 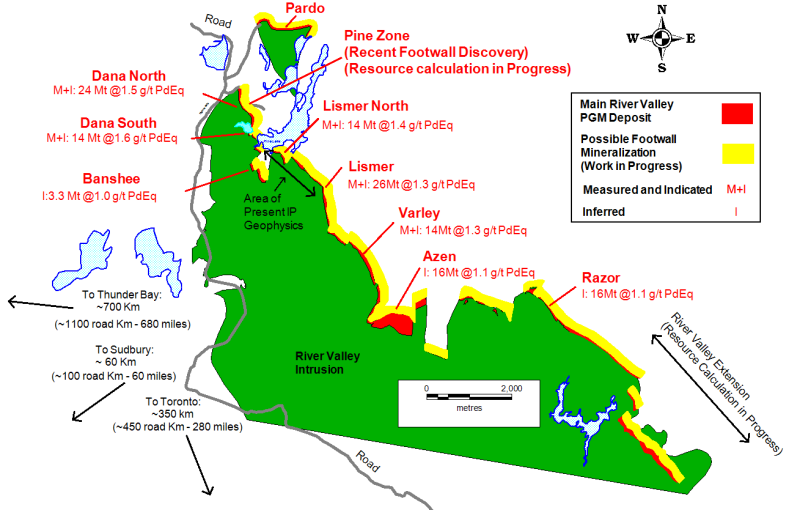 
Figure 2: The Yellow Band represents the interpolated footwall potential area of the River Valley Deposit based on the results of the Pine Zone where footwall mineralization was noted to extend 140 meters eastward from the main deposit. At present the only area that has confirmed footwall mineralization is in the Pine Zone (defined from 2015 to 2017 drilling). Exploration is in progress to test other areas of the deposit.

During the next year the company’s exploration & development objectives are:

We are encouraged about the economics surrounding PGMs as we continue to see ongoing deficits being forecasted in both Platinum and Palladium.  Most recently the price of Palladium, our primary metal at River Valley, has hit an all-time high, and outpaced all other commodities in 2017 and over the past 10 years. Our second most important metal Platinum, has come off its bottom price in late 2017 and has increased substantially to date. As a reminder to our shareholders and investors our River Valley Project also contains: Gold, Cobalt, Copper, Nickel, and Rhodium, most of which have experienced recent price increases.

Recently the World Platinum Investment Council forecasted a deficit in Platinum production for the next 5 consecutive years. Palladium for the 10 years from 2008-2017, has averaged 21.5% per annum while Gold averaged only 5.8% per annum over that same period. Both Platinum and Palladium, (outside of their extensive uses in catalytic converters which convert harmful gasses from hydrocarbon emissions into less harmful substances in vehicles), are considered precious metals, like Gold and are seen as a store of value.

In January, NAM announced a signed final agreement with Azincourt Energy Corp. (TSX.V: AAZ) for the Manitoba Lithium Projects. (News Releases: January 15th, and Feb 22nd , 2018 ) This Pegmatite Field hosts the world class Tanco Pegmatite that has been mined for Tantalum, Cesium and Spodumene (one of the primary Lithium ore minerals) in varying capacities, since 1969. NAM’s Lithium Projects are strategically situated in this prolific Pegmatite Field. Presently, NAM, under its subsidiary Lithium Canada Developments, is one of the largest mineral claim holders in the Winnipeg River Pegmatite Field for Lithium. Azincourt Energy Corp. as our option/joint venture/funding partner, is financed for and has committed to a minimum of $500,000 to be expended on exploration this year in Manitoba. A management committee has been formed, NAM was appointed the field manager, and plans are being formalized to begin the exploration process as early as possible in 2018. Our plan is to drill at least 2 of the 3 drill ready projects before the end of the year. Further announcements will be forthcoming.

In early February, our President Trevor Richardson was in South Africa attending 3 conferences with a full schedule, including two 1-2-1 style conferences with over 25 pre-booked meetings with mine finance companies, major mine companies, institutions, stock brokers, and high net worth individuals. In mid-February, Harry Barr (CEO) and Paul Poggione (Corporate Development), had a minimum of 25 pre-booked meetings at the Capital Event Conference in Whistler to meet new and existing investors, stockbrokers and institutions. In March, the entire New Age Metals team assembled in Toronto. We attended the RAI$E Capital 1-2-1 event, where at least 25 different groups were presented NAM’s corporate mandate via our slide deck. On the Saturday before the Prospectors and Developers Association Convention (PDAC), we had various meetings at the Metals Investor Forum Conference. Our main event, the PDAC in Toronto, the world’s largest mining convention, is where our company hosted a small hospitality room that doubled as a boardroom and over 40 meetings were completed to continue our New Age Metals market awareness program. Several meetings were held with prospectors, junior mining companies, and major mining companies, to advance our objectives. Our President, Trevor Richardson was asked to speak in two packed rooms, one for the Canada-China Investment Conference and the second in the Ontario Pavilion, both talks were focused on advanced stage mineral projects in Ontario.  Management of NAM believes that the 2018 PDAC was one of the best attended and most positive mining conferences in recent years.

In the first quarter of 2018, NAM signed contracts with Stockhouse.com, Investing News Network (a fully owned subsidiary of Dig Media Inc.), and International Mining Research. These programs will augment our existing programs with Palisade Global, Agoracom, Alpha Stoxx, and Star IR. We are pleased to be working with these companies whose platforms provide content and contact with thousands of investors every day. In early March, to add to our U.S. marketing program and our OTC listing (U.S. Trade Symbol: PAWEF).

NAM has signed contracts with NYC Radio, LLC, Corporate Profile Minute on the Larry Kudlow Show, which is featured on over 150 radio stations coast to coast, and the Ellis Martin Report, which is broadcasted on 100 terrestrial stations in the United States and worldwide via the VoiceAmerica Business Channel.

The Company also announces that it will make an application to the TSX Venture Exchange to amend the terms of 7,124,553 (post-consolidated) share purchase warrants, (the "Warrants") by extending the expiry date and amending the exercise price.

If you have not done so already, we encourage you to sign up on our website (www.newagemetals.com) to receive our updated news.

The Company has five pegmatite hosted Lithium Projects in the Winnipeg River Pegmatite Field, located in SE Manitoba. Three of the projects are drill ready. This Pegmatite Field hosts the world class Tanco Pegmatite that has been mined for Tantalum, Cesium and Spodumene (one of the primary Lithium ore minerals) in varying capacities, since 1969. NAM’s Lithium Projects are strategically situated in this prolific Pegmatite Field. Presently, NAM is the largest mineral claim holder for Lithium in the Winnipeg River Pegmatite Field. On January 15th 2018, NAM announced an agreement with Azincourt Energy Corporation (see News Release: Jan 15, and Feb 22nd, 2018) whereby Azincourt will commit up to $3.85 million dollars in exploration, up to 3 million shares of Azincourt stock to NAM, up to $210,000 in cash, and a 2% net smelter royalty on all 5 projects. Exploration plans for 2018 are currently in progress.

The contents contained herein that relate to Exploration Results or Mineral Resources is based on information compiled, reviewed or prepared by Carey Galeschuk, a consulting geoscientist for New Age Metals.  Mr. Galeschuk is the Qualified Person as defined by National Instrument 43-101 and has reviewed and approved the technical content of this news release.

On behalf of the Board of Directors

Cautionary Note Regarding Forward Looking Statements: This release contains forward-looking statements that involve risks and uncertainties.  These statements may differ materially from actual future events or results and are based on current expectations or beliefs.  For this purpose, statements of historical fact may be deemed to be forward-looking statements.  In addition, forward-looking statements include statements in which the Company uses words such as “continue”, “efforts”, “expect”, “believe”, “anticipate”, “confident”, “intend”, “strategy”, “plan”, “will”, “estimate”, “project”, “goal”, “target”, “prospects”, “optimistic” or similar expressions.  These statements by their nature involve risks and uncertainties, and actual results may differ materially depending on a variety of important factors, including, among others, the Company’s ability and continuation of efforts to timely and completely make available adequate current public information, additional or different regulatory and legal requirements and restrictions that may be imposed, and other factors as may be discussed in the documents filed by the Company on SEDAR (www.sedar.com), including the most recent reports that identify important risk factors that could cause actual results to differ from those contained in the forward-looking statements.  The Company does not undertake any obligation to review or confirm analysts’ expectations or estimates or to release publicly any revisions to any forward-looking statements to reflect events or circumstances after the date hereof or to reflect the occurrence of unanticipated events.  Investors should not place undue reliance on forward-looking statements.