Vancouver, British Columbia - TheNewswire - July 15, 2019 - Northern Lights Resources Corp. (CNSX:NLR.CN) (the "Company" or "Northern Lights") is pleased to announce that it has entered into a definitive agreement to acquire a 100% interest in the Secret Pass Gold Project ("Secret Pass Gold Project" or the "Property") located in Mohave County, northwestern Arizona (the "Transaction") as shown on Figure 1.

Northern Lights entered into a definitive agreement, executed on July 12, 2019, with a private Arizona resident (the "Seller") to acquire 100% interest in the Secret Pass Gold Project (the "Agreement").

Under the terms of the Agreement, Northern Lights holds an exclusive option to acquire the Project (the "Option") up until midnight Pacific daylight time on August 21, 2019 (the "Option Expiry Date"). Northern Lights is planning to complete its due diligence on the project prior to the Option Expiry Date. Company management is planning to be on site at the Project during the week beginning July 15, to conduct due diligence.

Upon exercise of the Option, Northern Lights Resources agrees to make the following consideration payments:

Upon completion of the final payment on or before October 15, 2019, 100% ownership of the Project will be transferred to Northern Lights or its nominee free of any third party royalties.

Other than the applicable Arizona State and BLM mineral production royalties there are no third party royalties payable on revenues produced from the Secret Pass Gold Project.

Completion of the Transaction is subject to approval of the CSE and other regulatory bodies as required.

In summary, Northern Lights has the option to acquire the 100% ownership of the Secret Pass Gold Project for total consideration payments of US$350,000 cash and 2,000,000 million shares of Northern Lights.

Northern Lights Chief Executive Officer, Jason Bahnsen commented: "The Secret Pass Gold Project Transaction represents an excellent opportunity for Northern Lights to acquire a high value exploration gold project at a very attractive price. The property will be 100% owned by Northern Lights and is free of third party royalties. Only 10% of the license area has been explored. There are over 13 km of gold bearing structures offering significant exploration potential for the project. Management believes this acquisition will generate significant value for Northern Lights shareholders."

As illustrated on Figure 2, the Secret Pass Project is located in the famous Oatman-Katherine Gold District of northwestern Arizona, close to the Nevada and California State borders. The Oatman-Katherine Gold District was established in 1863 and historically is Arizona's third largest gold producing area. Between 1870 and 1980 it is estimated the district produced over two million ounces of gold and one million ounces of silver. The district includes many historic mines and workings with over 80 separate mines reporting production. Current operating mines in the area include the Moss mine owned by Northern Vertex Corp., an open pit heap leach operation that reached commercial production in September 2018, and Para Resources Inc. that reported starting underground production at its Gold Roads Project in February 2019. 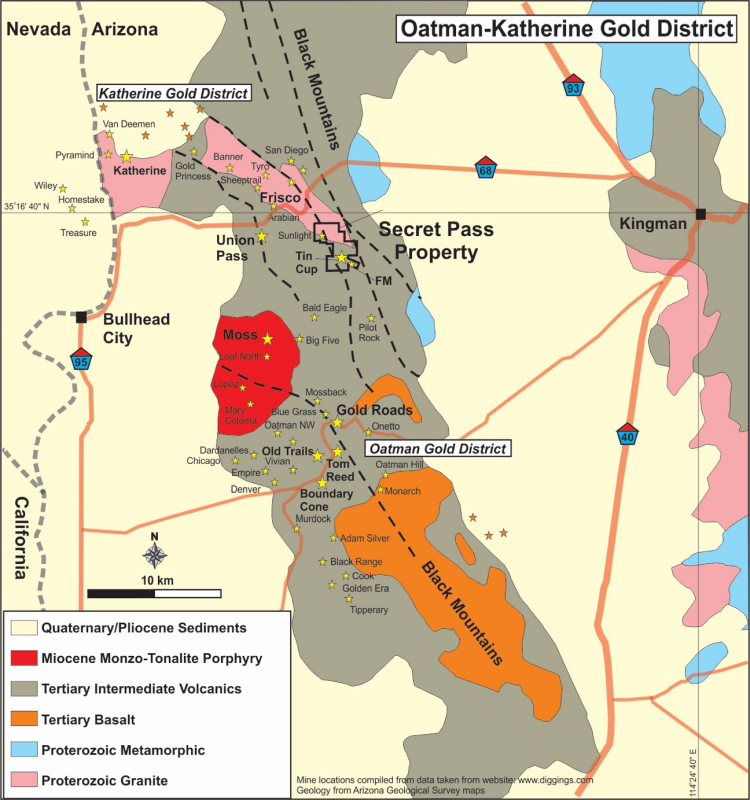 The main structural feature in the region is an imbricated system of shallow to steeply dipping faults that trend north-northwest. With reference to Figure 2 this fault system has been traced for approximately 65 km extending from the Oatman District in the south, through the Secret Pass-Frisco Mine area, into the Katherine Gold District. As illustrated on Figure 3, two regional structures, the Union Pass and the Frisco Mine faults, transect the Secret Pass property. Numerous gold showings and prospects are associated with the Union Pass and Frisco Mine faults, and some have reported limited gold production. The Oatman District is located approximately 13 km south of Secret Pass property, and has produced over two million ounces of gold. 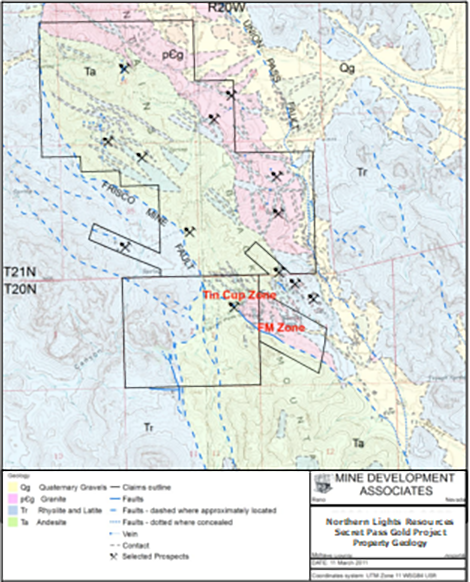 Mining records indicate that there are 10 historic mine workings located in the Secret Pass license area. The Tin Cup and the FM gold prospects were extensively explored and drilled by Santa Fe Mining and Fischer-Watt from 1984 to 1991. A total of 14,000 metres of drilling was completed in 126 holes including 114 reverse circulation and 12 core holes.

The mineralized zone has a strike length of approximately 245 metres and a drill-indicated depth of up to 180 metres, both open along strike and depth. High-grade mineralization greater than 3 g/t Au, is localized in a 3.0 to 7.6 metres wide, steeply northeast-dipping structure that occurs within a much wider mineralized fault zone that ranges from 30 to 45 metres in width. The mineralization has a northwest plunge and is considered to be open at depth. Surface oxidation extends to a depth of up to approximately 120 metres.

The FM Gold Zone is also controlled by the northwest-trending Frisco Mine Fault that dips steeply to the southwest. Gold mineralization at the FM zone is hosted exclusively by granite and rhyolite and has a strike length of approximately 200 metres and extends to a depth of up to 120 metres, open along strike and depth.

The zone of mineralization ranges from 13 to 30 metres in width at the surface and then transitions into distinct 3.0 to 8.0 meter near-vertical, low-grade (<1.5 g/t Au) structures at depth. Depth of oxidation is variable but is generally extends to a depth of 75 to 100 metres.

The Tin Cup mine reportedly produced several hundred tons of mineralized material grading 15 g/t (0.5 oz/t) to 31 g/t (1 oz/t) of gold. Historic workings from the 1930's included an open pit and an inclined shaft to a depth of 21 metres (70 ft) with minor underground level workings. There has been no known production from the Tin Cup Mine since the 1930's.

During the period from 1984 to 1991 drilling program, significant gold mineralization was intersected in a number of holes in the Tin Cup Gold Zone. As illustrated in Figure 4, gold assays ranging as high as 40 g/t Au over significant widths at depths ranging from 30 to 180 metres below surface. These results are historical in nature and a qualified person has not done sufficient work to verify these previous drilling intersections. 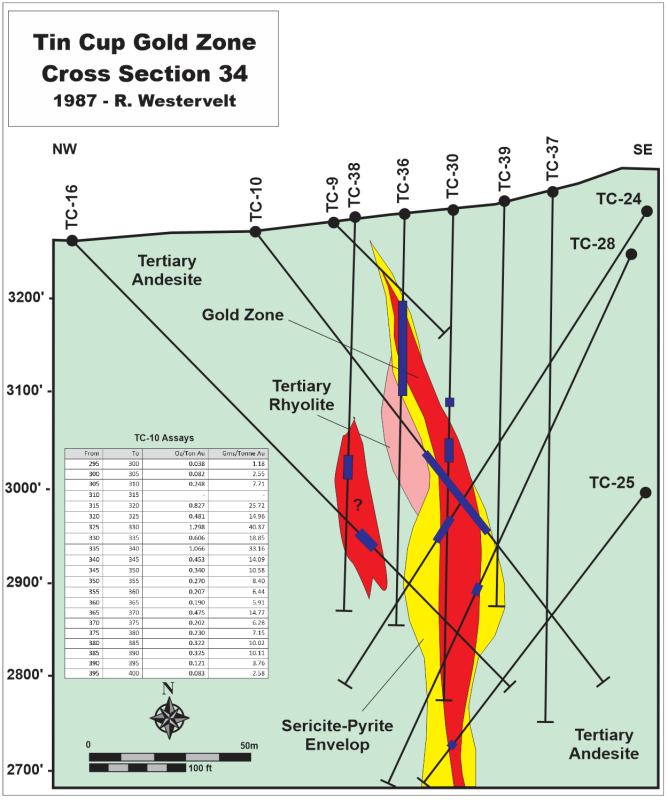 (Modified from Arrowstar Resources NI 43 - 101 Report, May 4, 2016. Note this information is historical and has not been verified by a qualified person under the guidelines of NI 43-101)

The scientific and technical data contained in this news release was reviewed and approved by Gary Artmont (Fellow Member AUSIMM #312718), Head of Geology and qualified person to Northern Lights Resources, who is responsible for ensuring that the geologic information provided in this news release is accurate and who acts as a "qualified person" under National Instrument 43-101 Standards of Disclosure for Mineral Projects.